Lots of people have heard about it. Lots of people stood for the infamous Shooting Star from Uzbekistan. But just a few had the chance to play under its banner. Quentin is one of the twenty players who’s worn the kit with the Samarkand Star on the chest. With the most committed defenders of Uzbekistan in France, he conquered 5-aside pitches from Paris suburbs. Like the star, Quentin has now reached new types of heights. He’s left everything behind him but his girlfriend, and jumped on a bike to ride to the other side of the world. We are proud that he chose Football Campagne to tell his story and share beautiful pictures of football pitches he’s discovering on the way. This first chapter of En Selle brings us to Italy and Albania, but there is much more to come. Enjoy the ride.Dear Quentin, can you introduce yourself?

I’m Quentin, 30 years old, playing and passionate about football since the early days. At the end of last year, I quit my job, my flat and most of the things I owned to go on a trip for two years with my girlfriend.

Can you tell us more about this trip? What’s the ultimate goal?

First of all, we went on this trip to have a break after the first professional years that have been pretty intense for me. I realised I was free to move and do what I really wanted, and I decided to celebrate my 30th Birthday and to go to adventure. With my girlfriend we set the goal to reach Asia riding our bikes within two years, living on the road and doing volunteering work. We’re not using planes at all. For this trip we want to return to a simpler way of life, slower and healthier than how we lived before, but also to discover new cultures so we can come back inspired and with plenty of new ideas.

What’s the relation between the countries you’ve travelled to and football? What struck you the most?

I’ve only ridden through France, Italy and Albania so far. Three countries with a real love for football. International football is present everywhere, inside the houses, but mostly in bars. Stadiums in the South of Italy really inspired me. In France a lot of football grounds stay open to everyone, but in the South of Italy, most of the stadiums are closed and they make sure it can’t be accessed. Even if the countryside. I found it quite sad.

Do you see a lot of abandoned pitches?

I noticed a few ones yes, but much more in Albania. They’re not particularly good at keeping infrastructures at a decent level over there, and I wonder if sheeps aren’t more used than machines to mow the lawn.

I’d say it’s mostly the environment around the stadiums. A ground in the middle of the mountains, or at the heart of a village for example. But also its history. I like the fact you can see the marks of time, the stands that got deteriorated over the years, the changing room or the benches on the side of the pitch. And when there are local teams playing on it, it’s even better.

What’s your favourite pictures amongst all the ones you’ve sent us?

The one with with Mount Etna in the background for sure. I find it pretty amazing that you got to play football with an active volcano in sight. It’s unbelievable, even if it’s harder to realise that on an image versus reality. 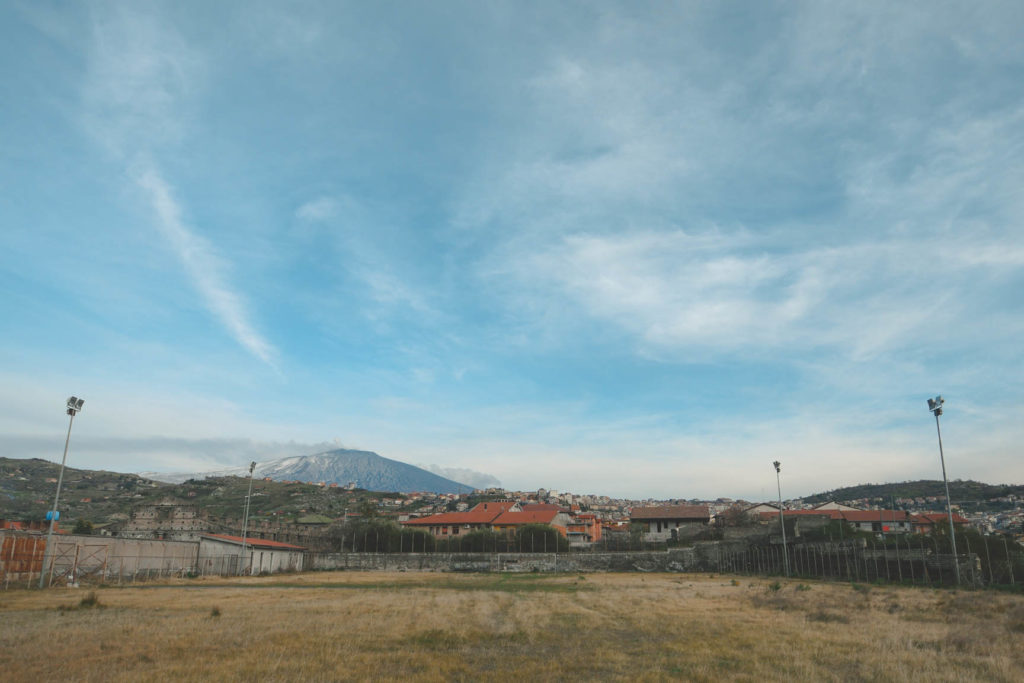 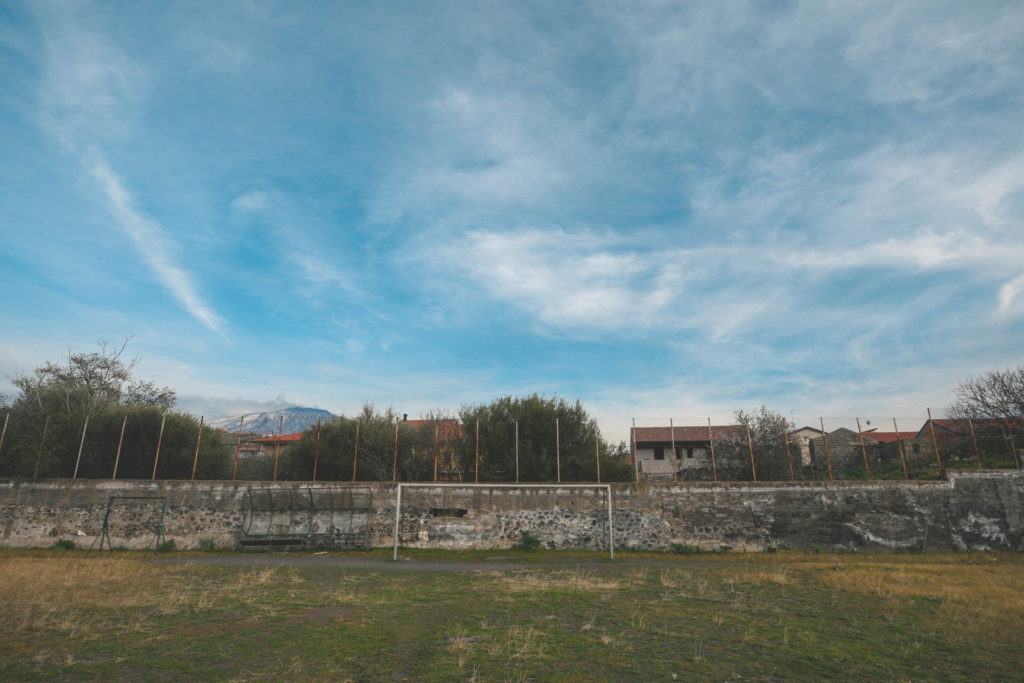 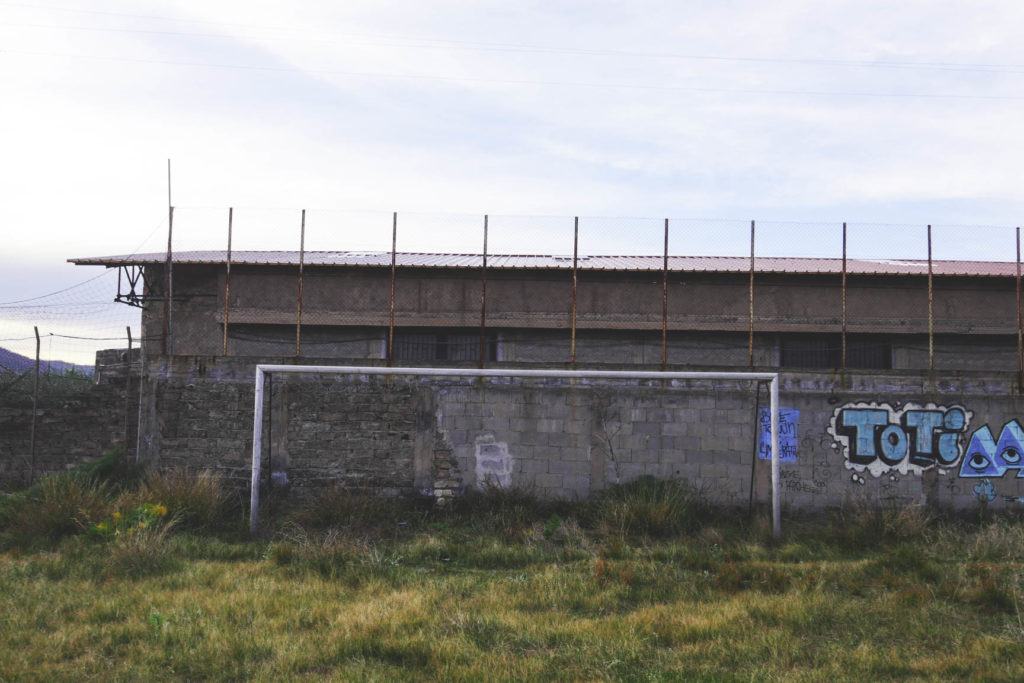 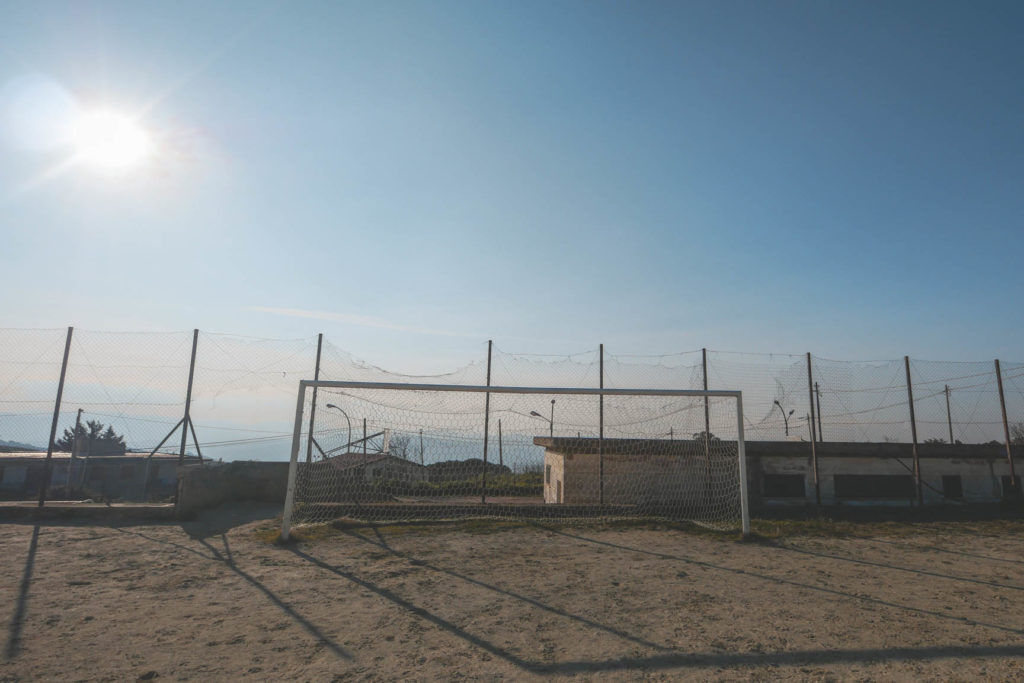 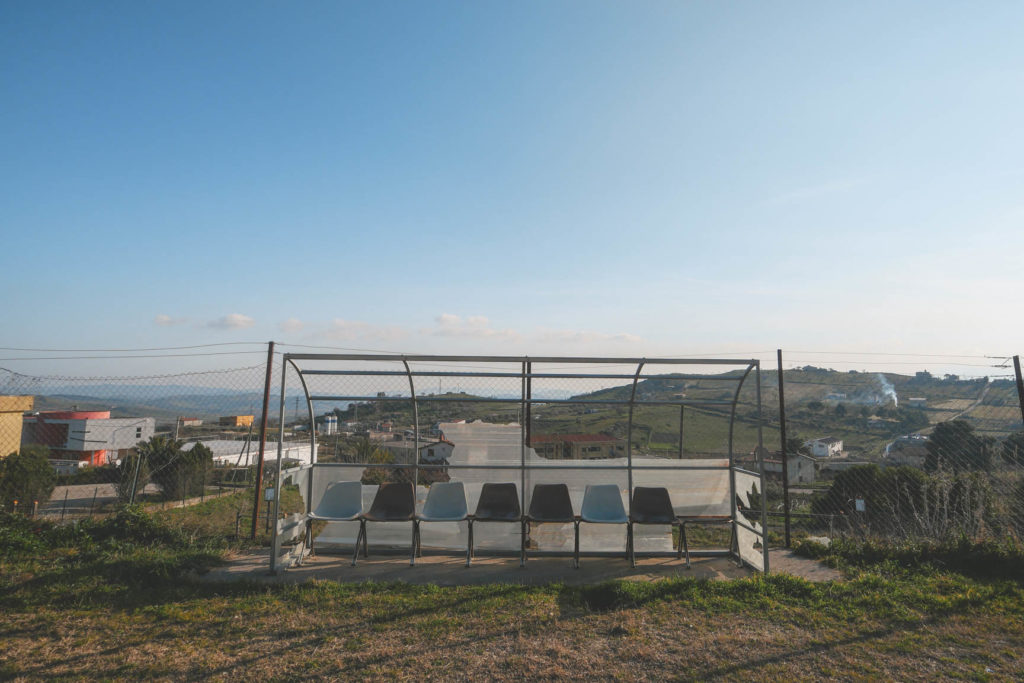 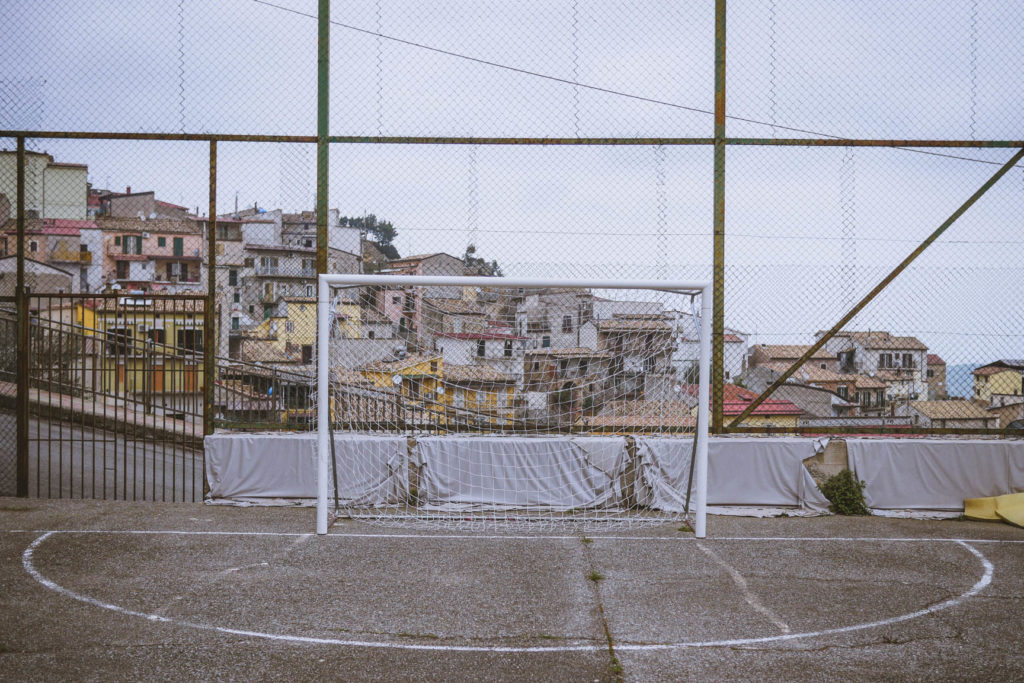 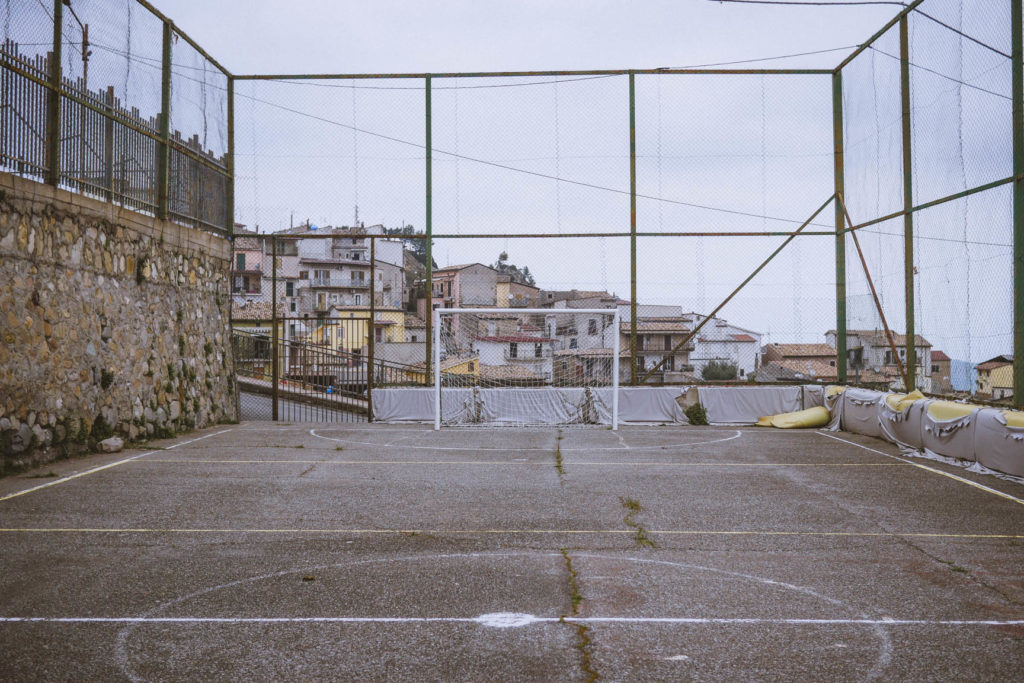 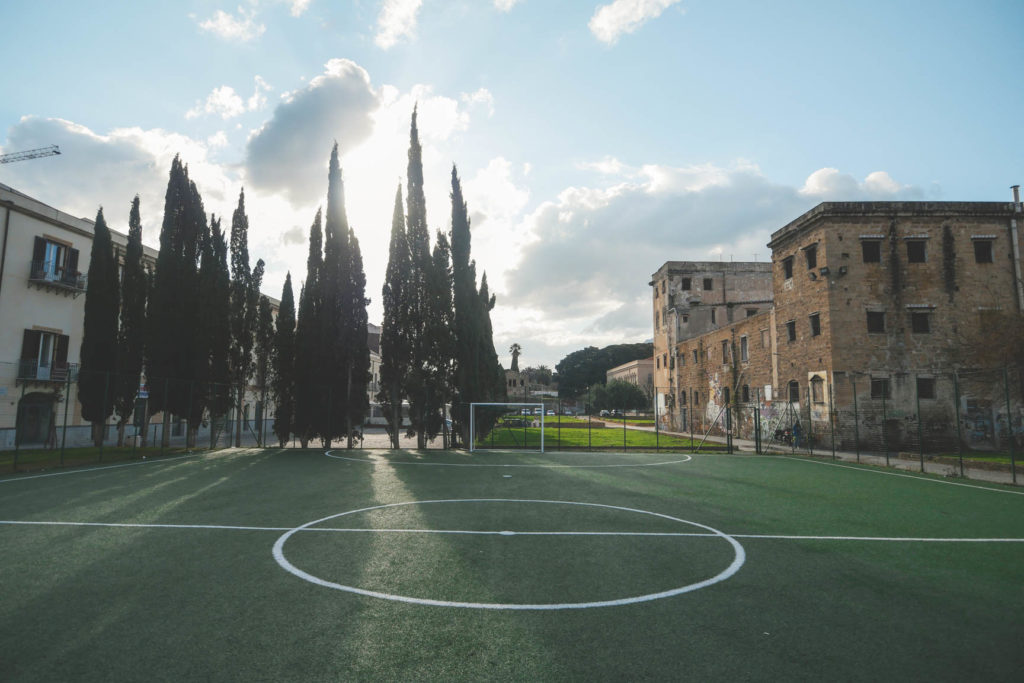 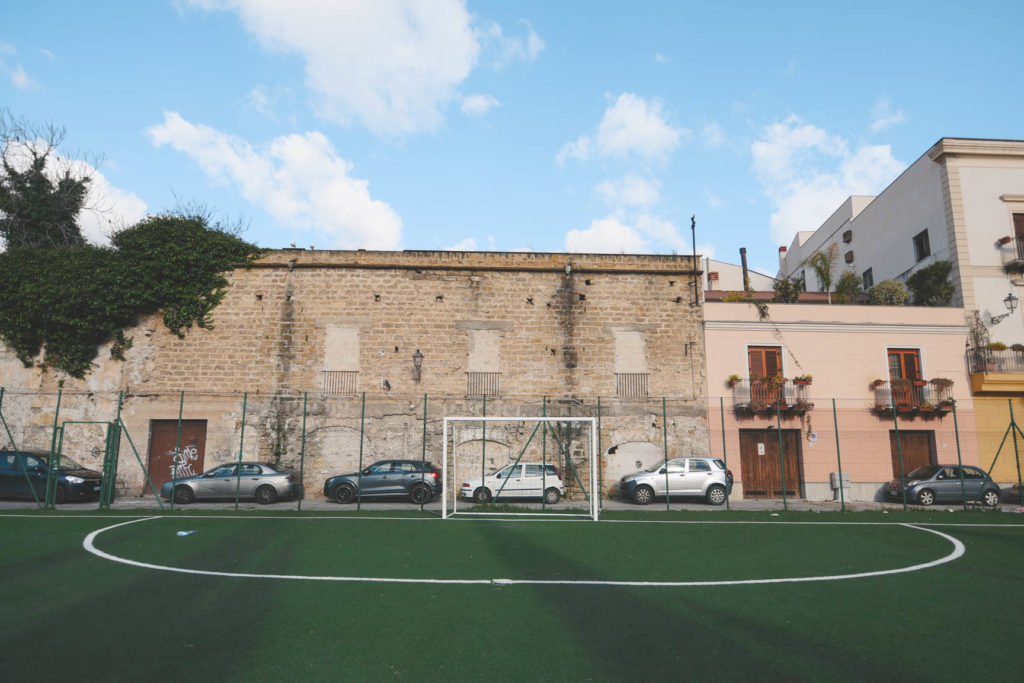 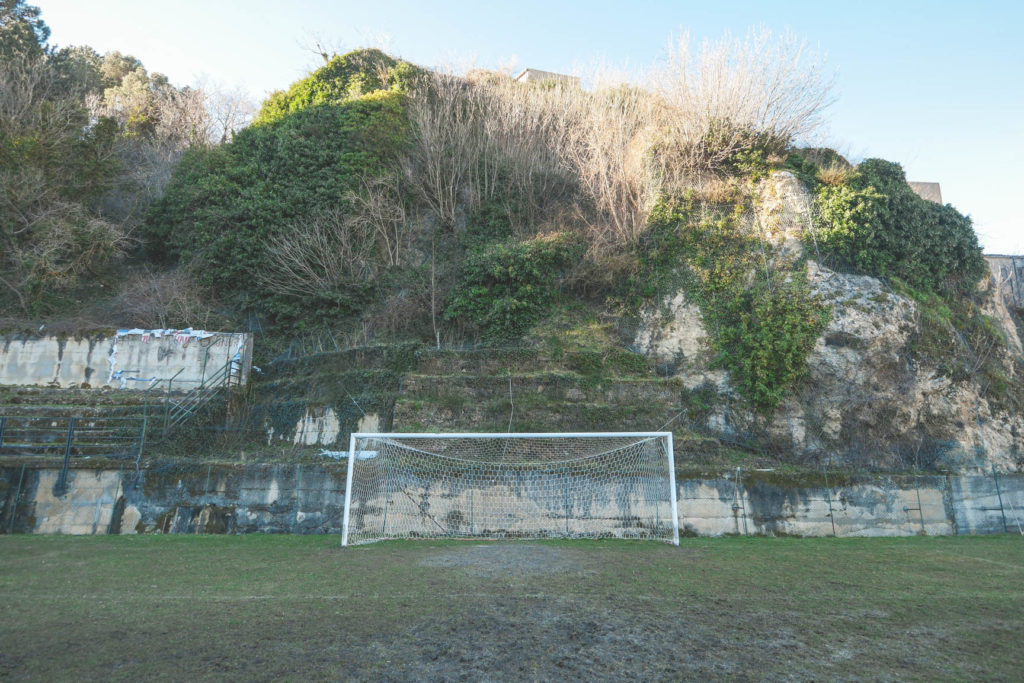 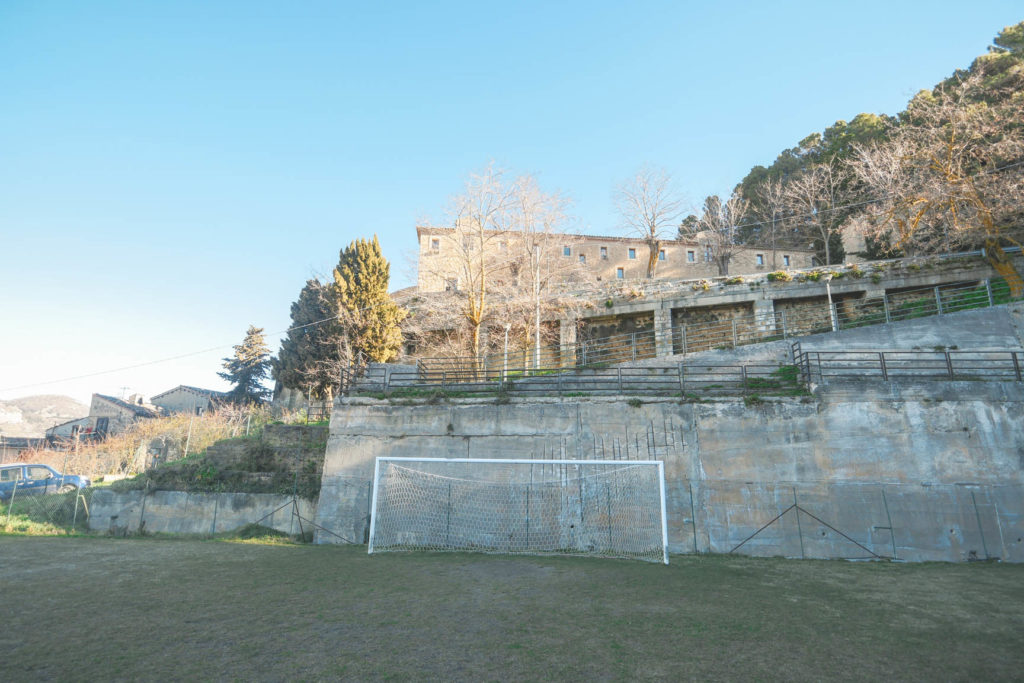 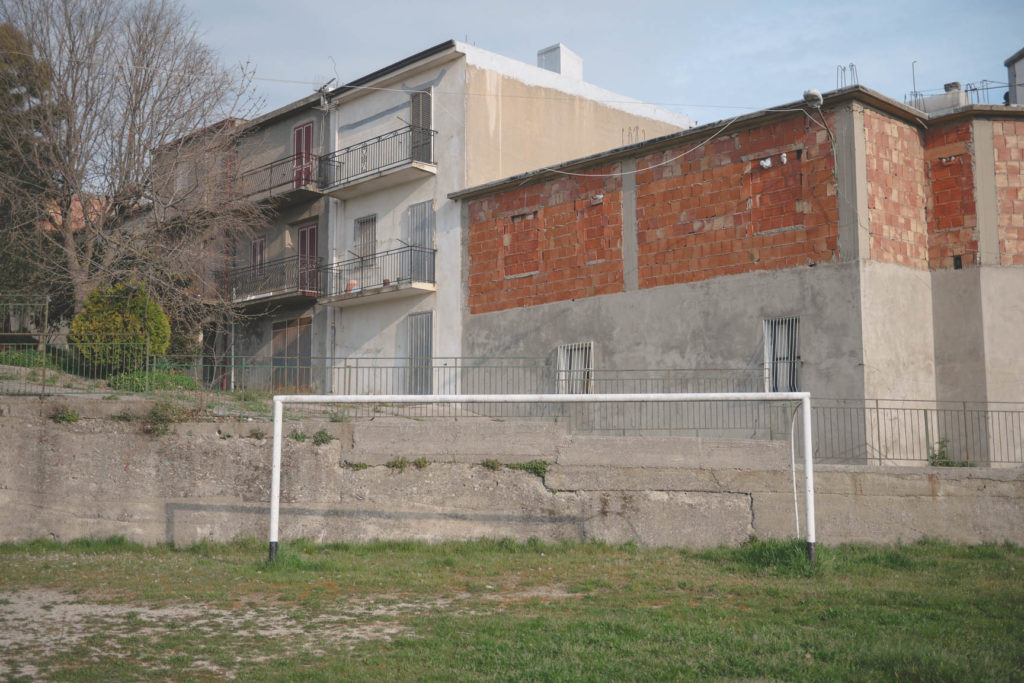 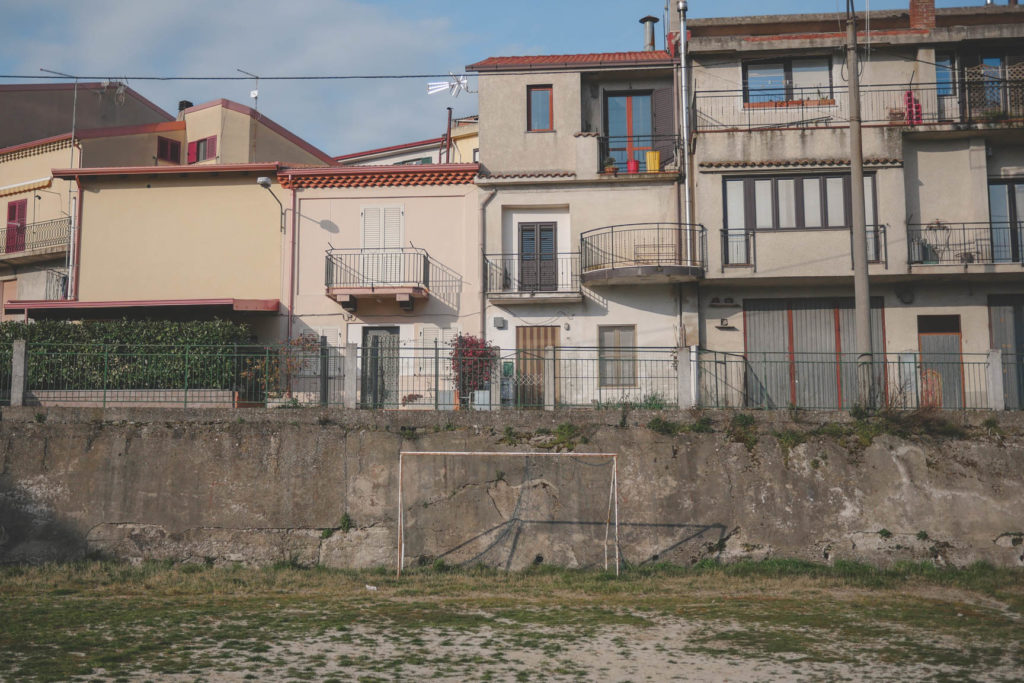 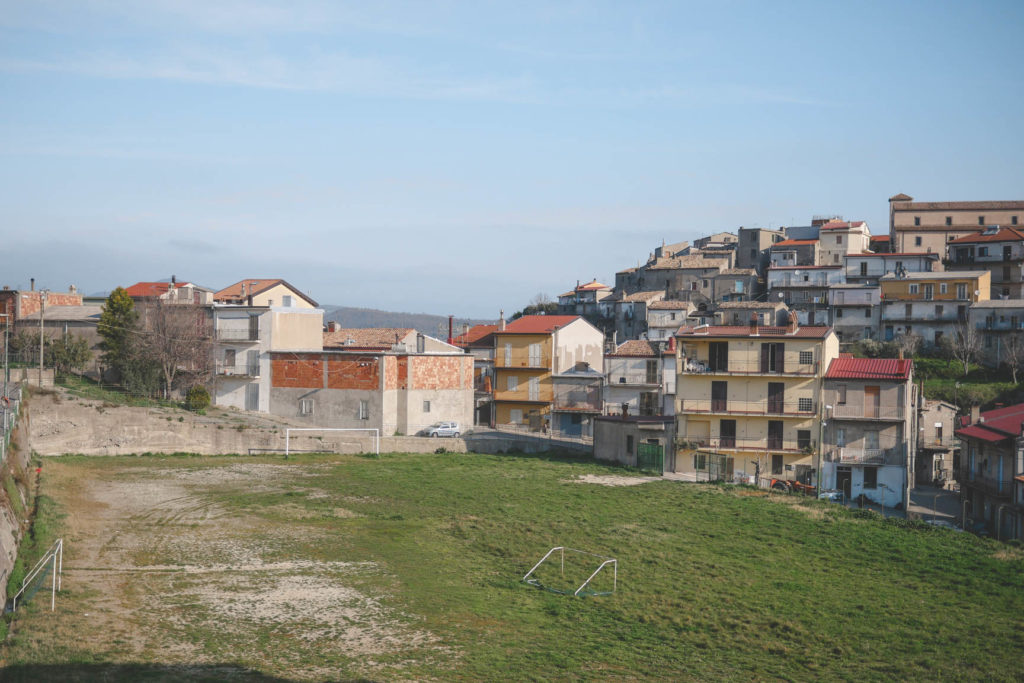 What’s your process to find the stadiums? Do you just ride past them and stop to grab the shots or are you looking for them specifically?

When you’re on a road trip on a bike you don’t have as much freedom as in a car. What I mean is that adding 15km to your stage to take pictures of a stadium isn’t that easy. Especially when you’re two on the trip and that our ultimate goal is to reach the other side of the planet. We have mapped our route based on nice roads more than nice football stadiums. That’s why I take mainly pictures of the pitches I ride past through. But on such a long trip that gives me more than enough options and I can find proper gems.

Your girlfriend isn’t pissed about it?

Well it’s always enjoyable to stop for a break. When I take pictures of a stadium, she makes the most of it to get some rest and recharge. It’s all good then.

Is there any particular story you have in mind to tell us?

In Italy (Verzino) I had the chance to realise my childhood dream: camping in the middle of a stadium. We set our tent on the pitch, straight at the middle of the village. Not a discrete spot at all. A family living in a house near the ground saw us and invited us to share the dinner with them. Such a great memory.

Did you meet interesting people?

Definitely. We met many great local people during the first three months of the trip. First of all, we are travelling on a long period of time and with a minimal budget which means we are camping as much as we can and we tend to avoid hotels. Quite often we are asking the locals where we could set the camp, and some people are actually inviting us to stay at their place. Since we’re in Albania, we pretty much sleeping at someone’s every night. People are so nice there.
I’ve also noticed that travelling on a bike sparks a lot of interest amongst local populations. People are very curious about it and come to meet us and chat about our adventure. We’ve had the chance to share a lot of beautiful moments with them.
The other great thing is that we have a lot of time for us and we try our best to take the time to chill, work as volunteers in exchange of accommodation and food. We spend some time in Corsica, Sicily and North of Albania, and to give you an example we have been working doing GPS tracking for the trails of Valbona Natural Parc, which weren’t referenced yet. All these moments gave us the opportunity to live like the locals, to share their daily life and to take some inspiration from different way of lives than what we’re used to.

Last but not least, what’s the most terrible football pitch you’ve ever played on?

That wasn’t during this trip as I’ve only been able to play once, in Albania on a 3G pitch. To be fair I really miss playing and it hasn’t been that easy to meet people to play with so far. I hope I’ll have more chances with summer coming up. However, since I was a kid, I have played on lots of bad pitches. Especially in Marseille suburbs. Back in the days artificial grass didn’t really exist and when you play on a regional level on dirt pitches, it’s pretty bad. But if there’s only one I have to pick, I’d say the one from my High School. On top of a hill, the pitch not quite flat and we had to slalom in between the rocks to go straight to the goals. 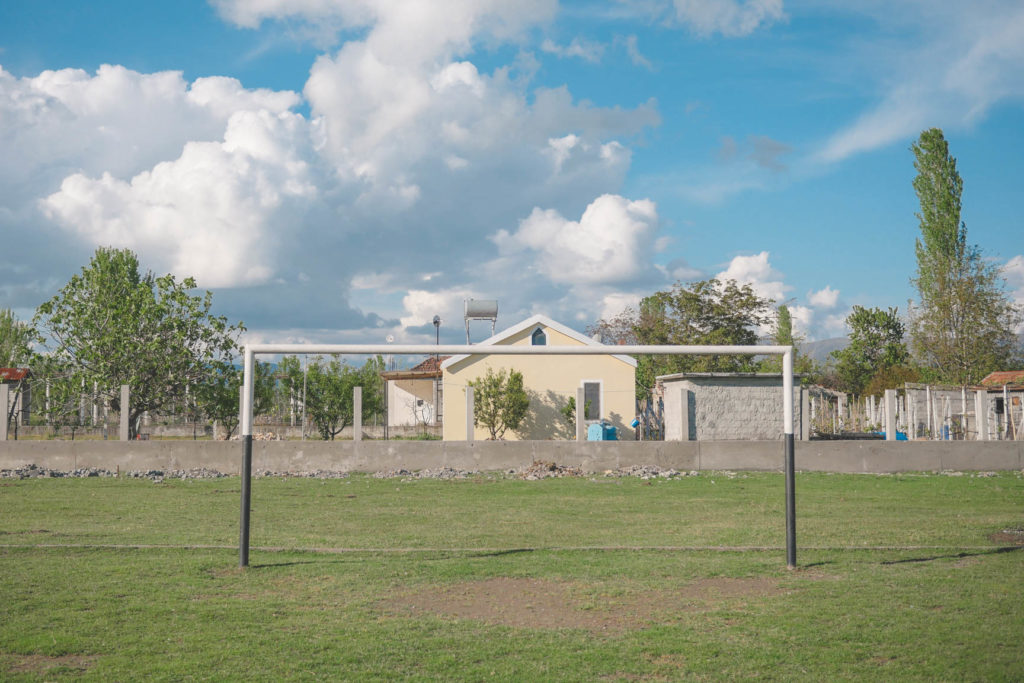 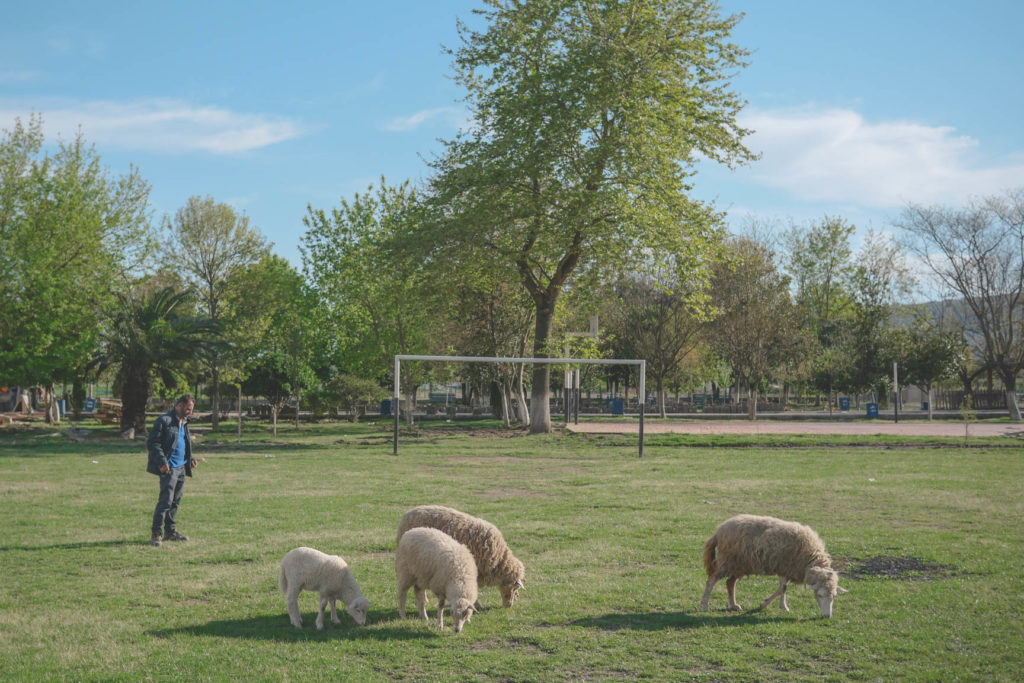 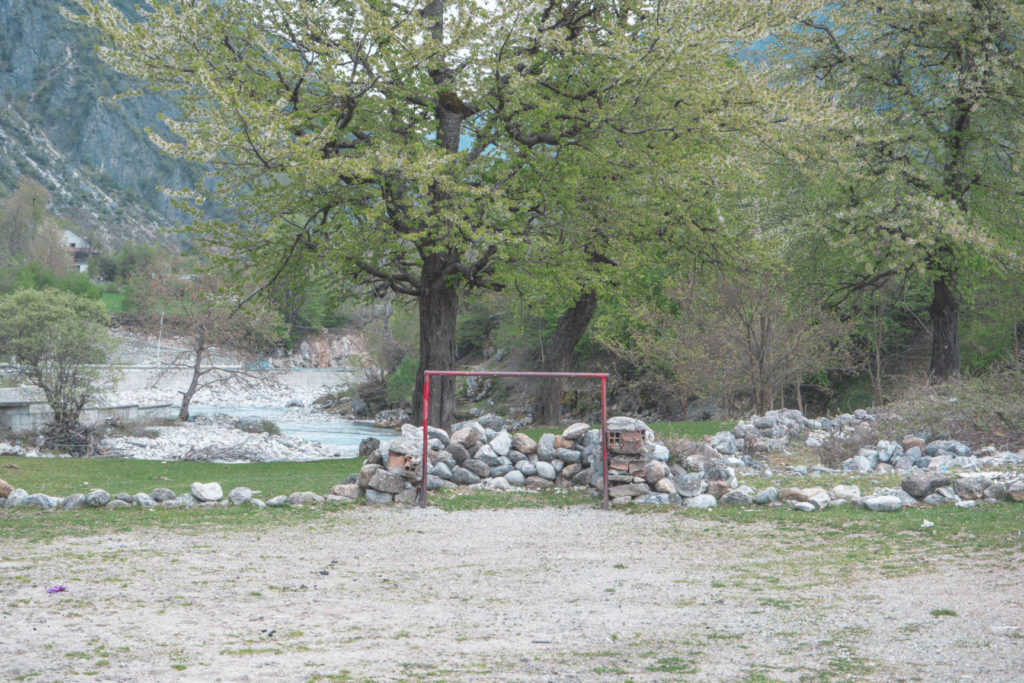 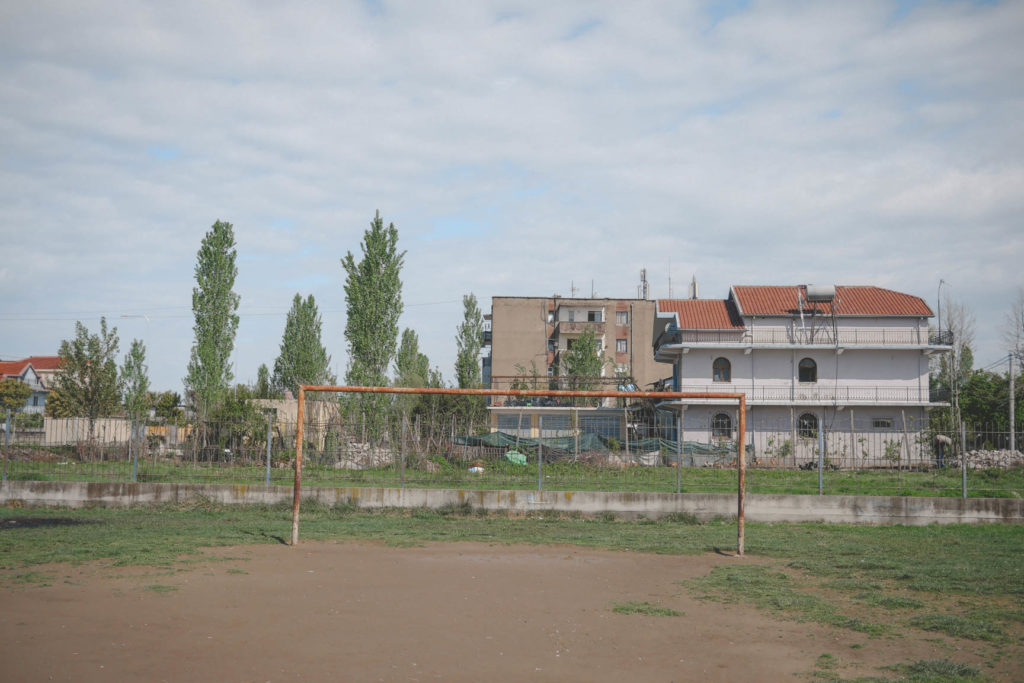 Pictures by Quentin B, who keeps riding to the other side of the world. We will see you back soon here for the next chapters of this crazy adventure. For more content you can follow his trip in real time on the page En Selle.