A trip to the roots of Football in Scotland. Where the fields become the ground of unpredicted encounters between football players and animals. That’s a place where the fans like to sing, like to drink, there are three barrels of whisky per capita in this wonderful country, and enjoy watching football when it comes with beautiful landscapes. The game is tough, the conditions are tough, but in simplicity lives all the beauty. What strikes us as we ride along the Highlands to the Isle of Skye and on the shores of the infamous Loch Ness, more than the precision of the strikers, is the location of pitches we discover in the middle of nowhere. Stunning, astonishing, surprising as a dribble by Jeremy Clement, these football grounds are like nothing else we’ve seen before in our Son of a Pitch photo series. That’s the reason why on the road we take the time to stop the car, grab the camera and let time pass in the middle of the lawn. Capturing the moment.

First stop of the expedition. On the shores of Loch Lomond, this pitch is a snapshot on what we’ll find in the Highlands. No lines, the ground covered by a soft moss, the perfect spot to take a nap with a nice view on the lake. 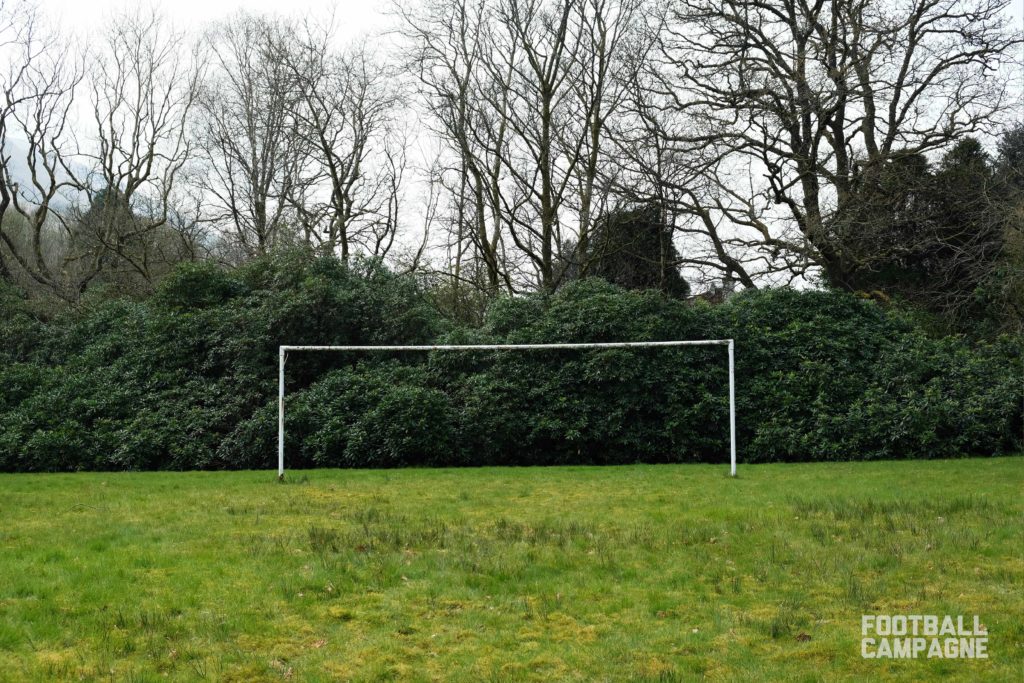 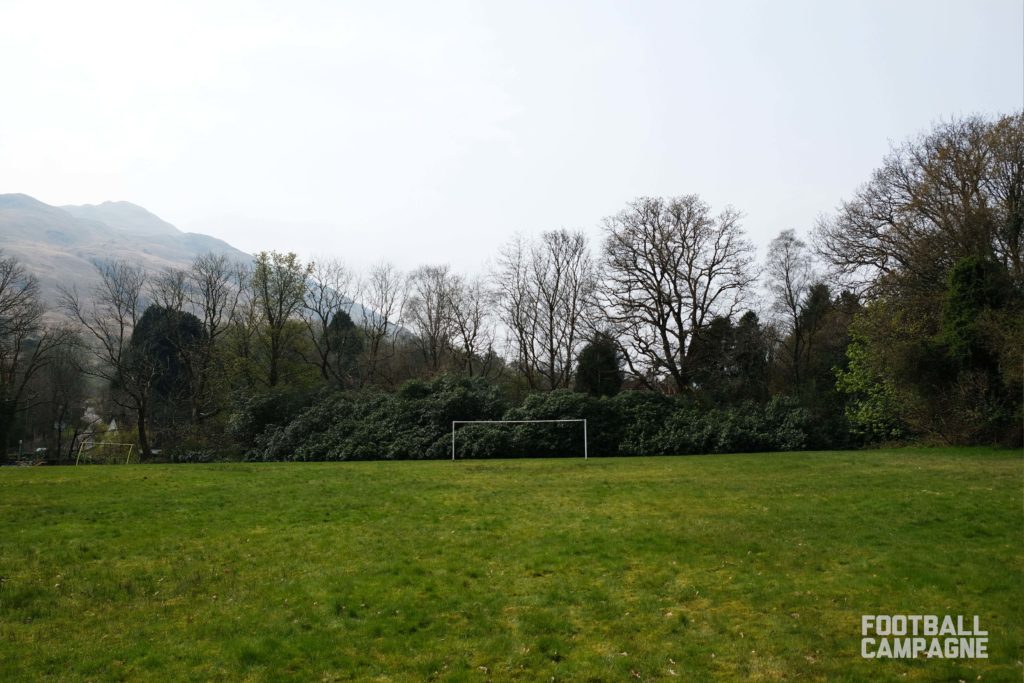 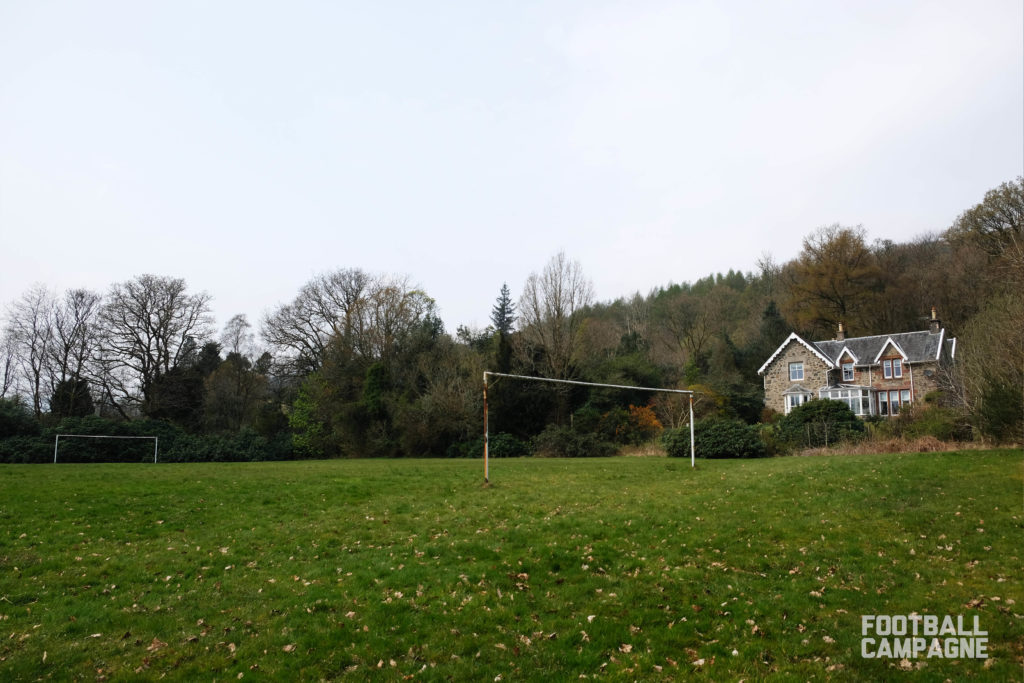 A great spot for a lunch break. Mountains in sight, sheeps in the field behind the goals, this small pitch in Tarbet brings a different perspective and reminds us that football can be played anywhere. 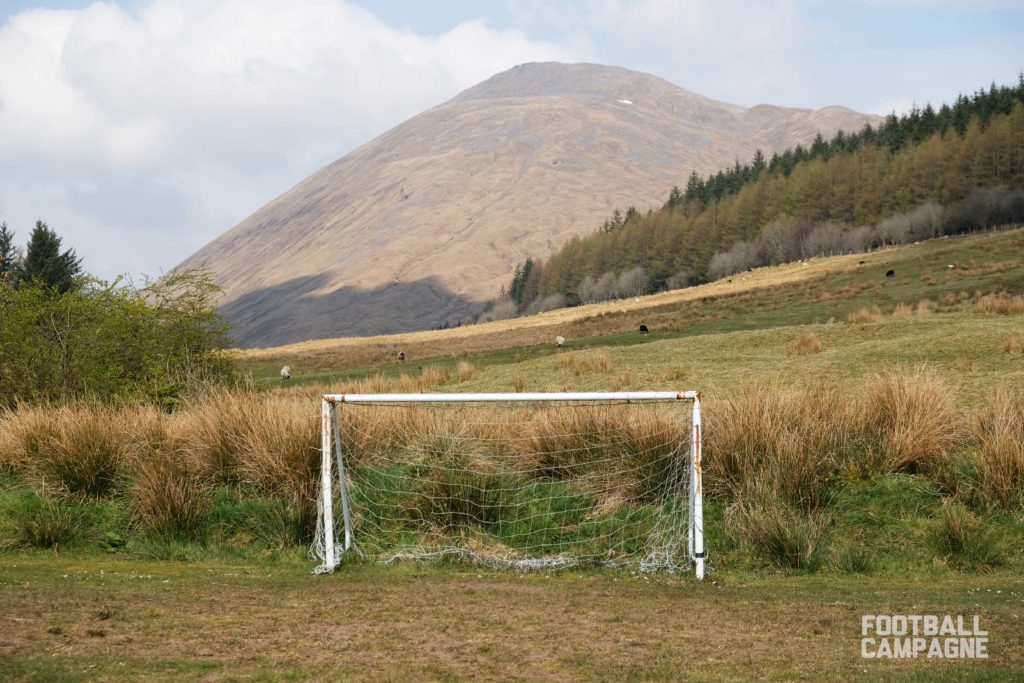 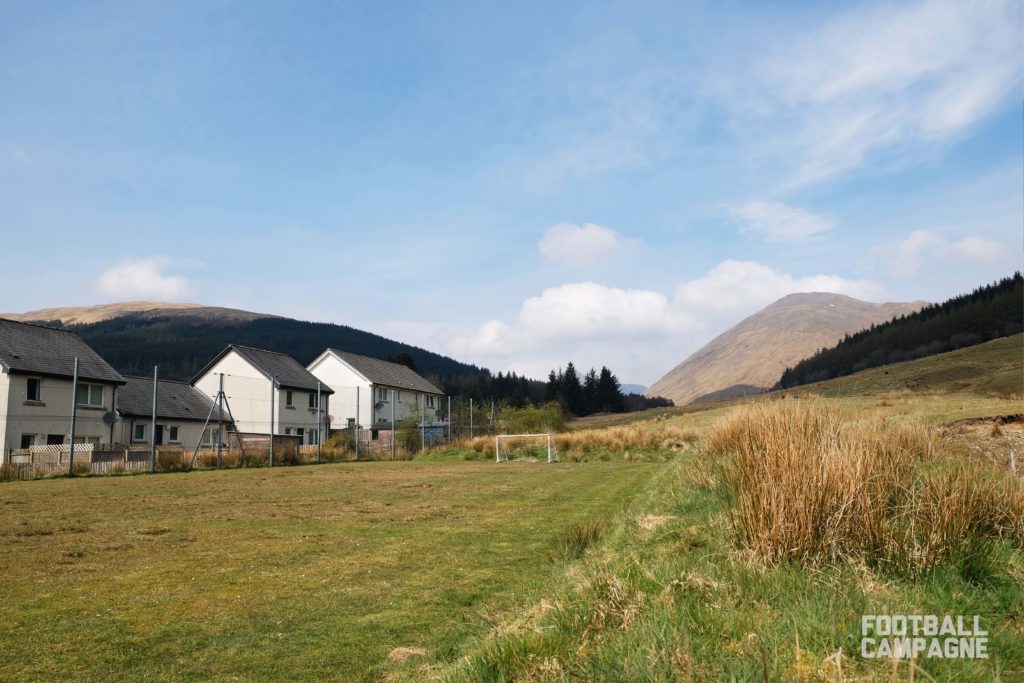 We’ve got no idea how to pronounce the name of that village near Glencoe. But we’ve got it pretty clear that the way of life is chill and smooth over there. The ground is nice, peacefully surrounded by the peaks. 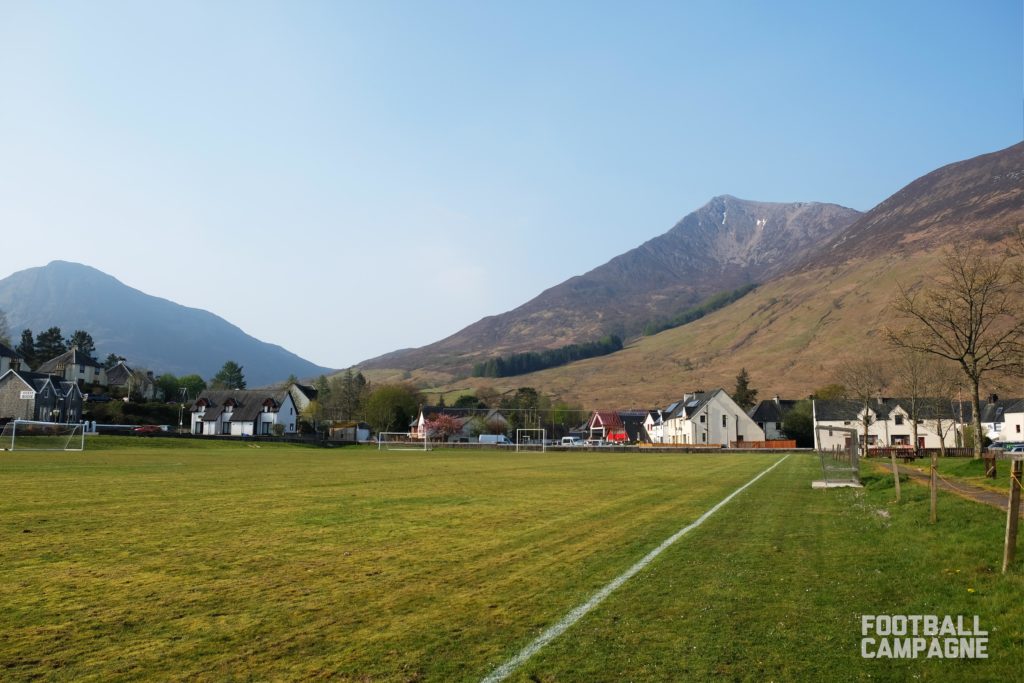 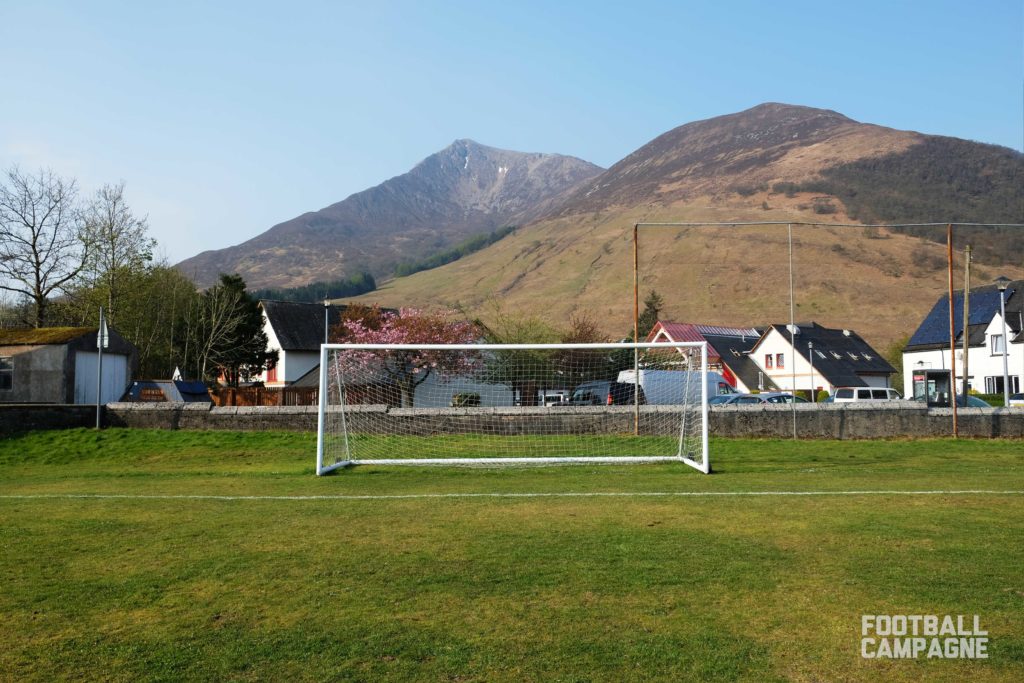 Pit stop in Glengarry. As we were desperate to find public toilets on the road, we find this meadow used to kick the ball. There’s no way we’re not giving it a go. Fuck it, we’ll do it in the nature. 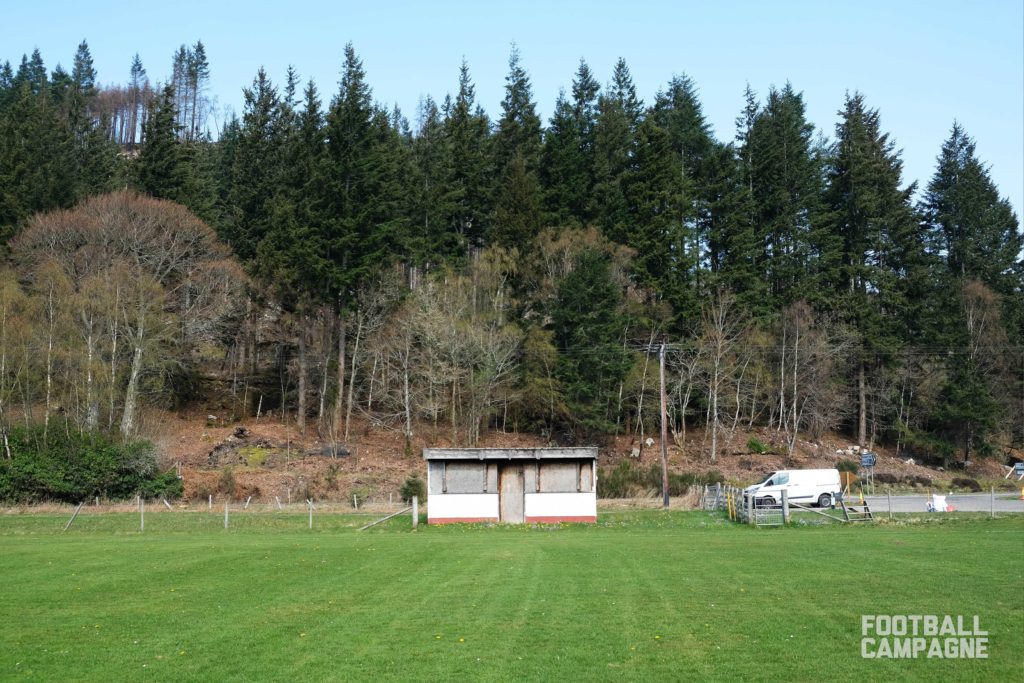 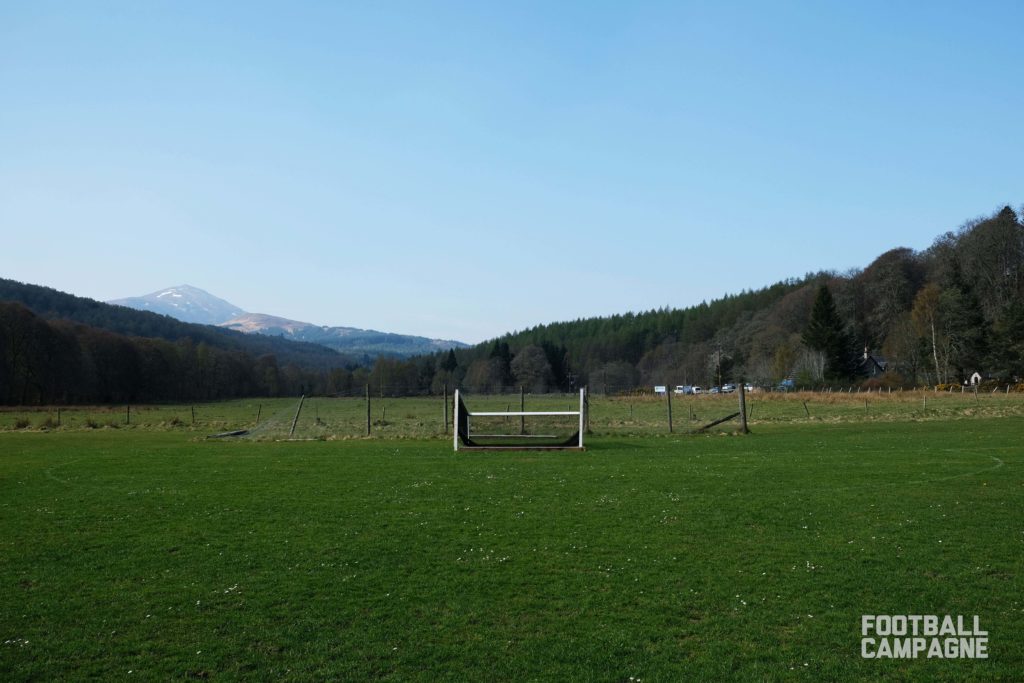 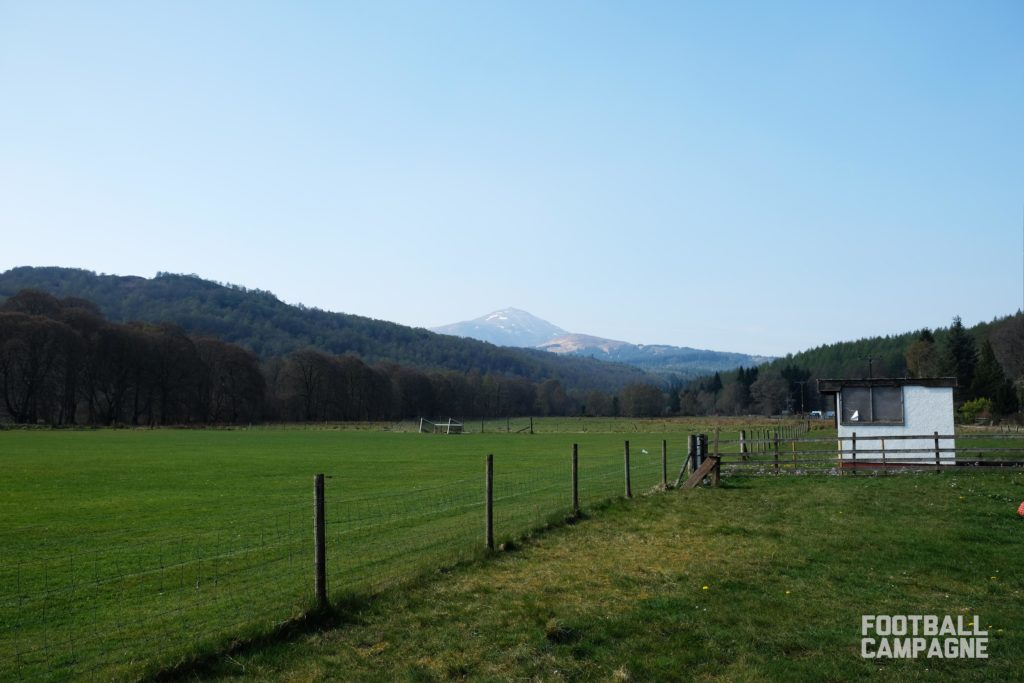 This stadium caught our eye as we were on the way back from the visit of Talisker distillery. We had a couple of drinks of this excellent aged whisky, as we fell in love with its unique taste and character. Made in the Isle of Skye, shaped by the Isle of Skye. We definitely recommend it to everyone. Even children. For a bit of culture, the Talisker distillery was founded in 1830 and is the oldest of the Isle of Skye. From the pitch, you can see the long white chimney of the distillery, and smell the steam of whisky. If there is only one thing to remember in this article, it’s probably that Scots prefer whisky to football. In fact, local production is such that there are three barrels of whisky per inhabitant in the whole country. If Emile Heskey was born in Scotland, no doubt he’d have been named Emile Whisky. 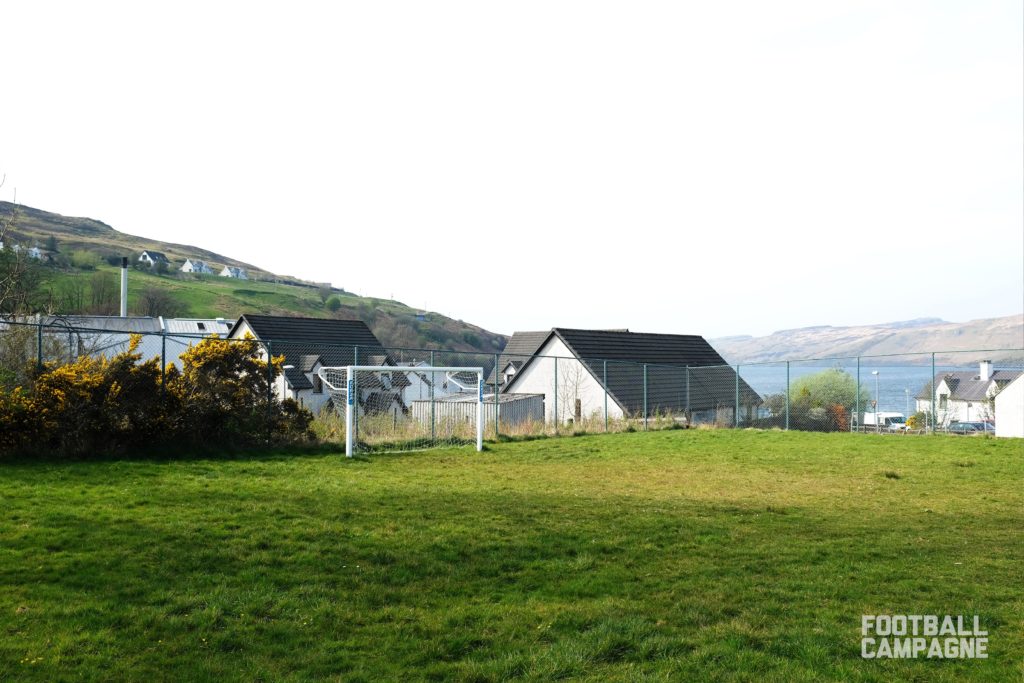 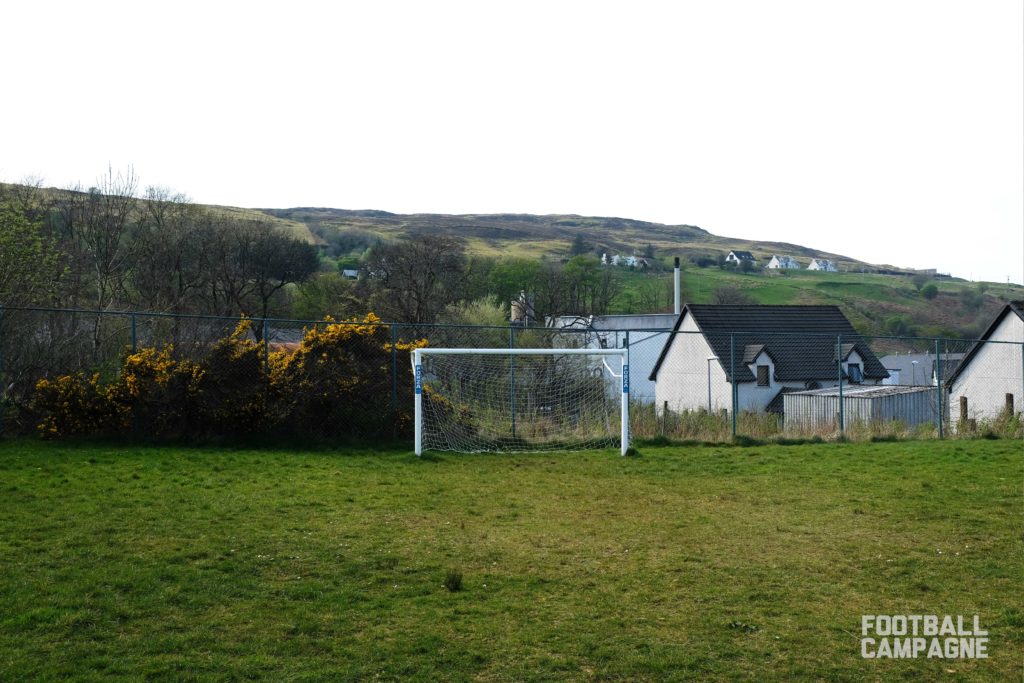 Without a doubt our favourite pitch of the trip. Lost at the North West of the Island, on the road to Neist Point, in the middle of the fields, this lone pitch hosts two teams of sheeps. The animals have stormed the pitch a while ago and now they old their ground. 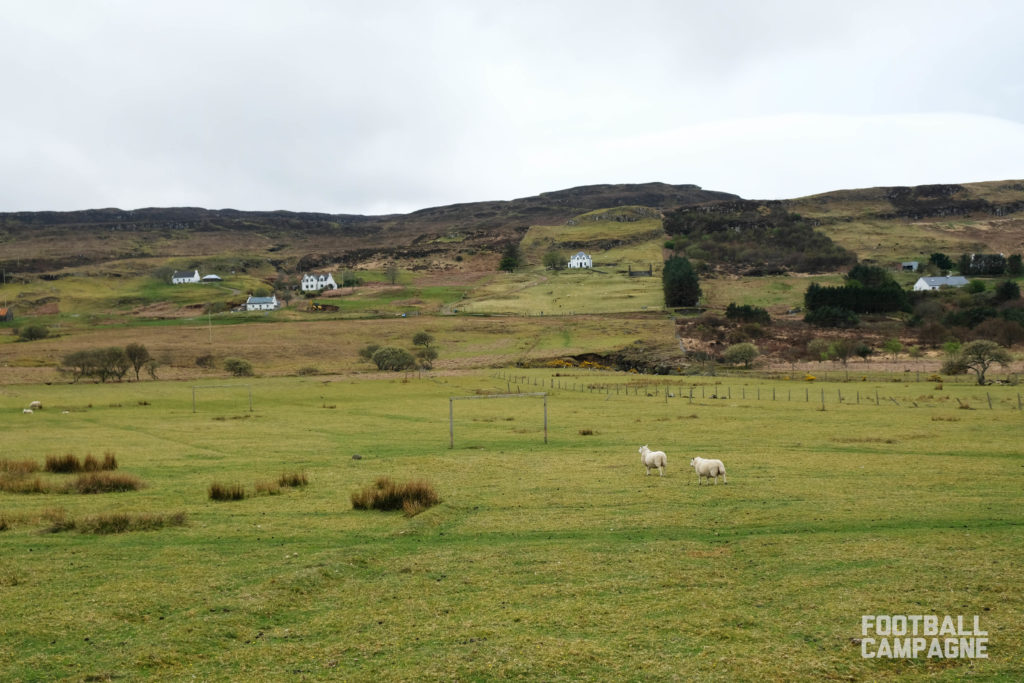 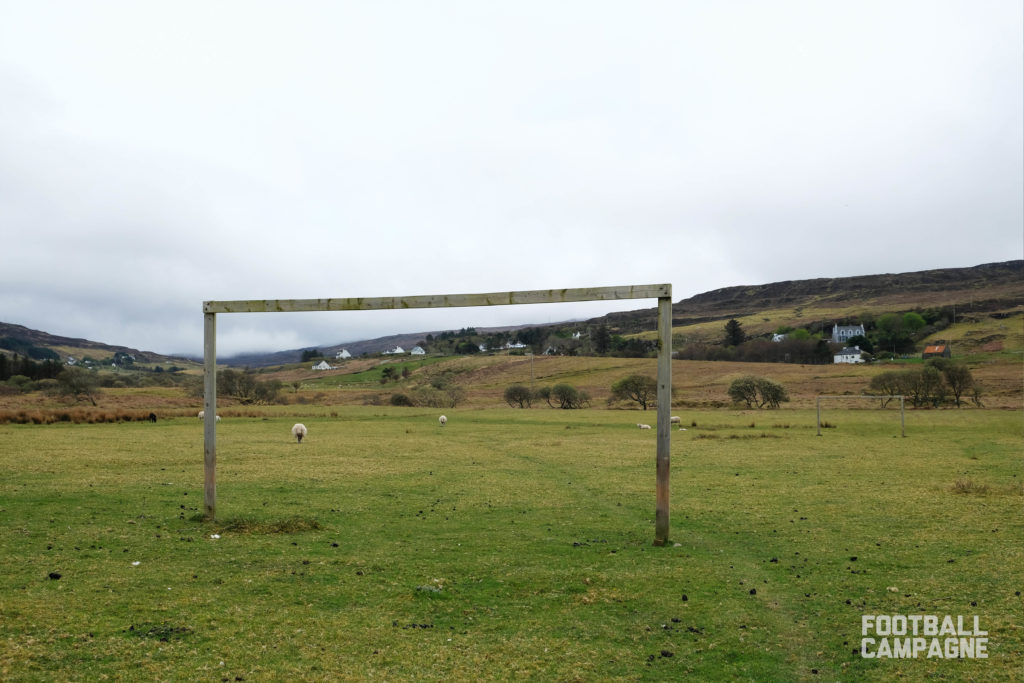 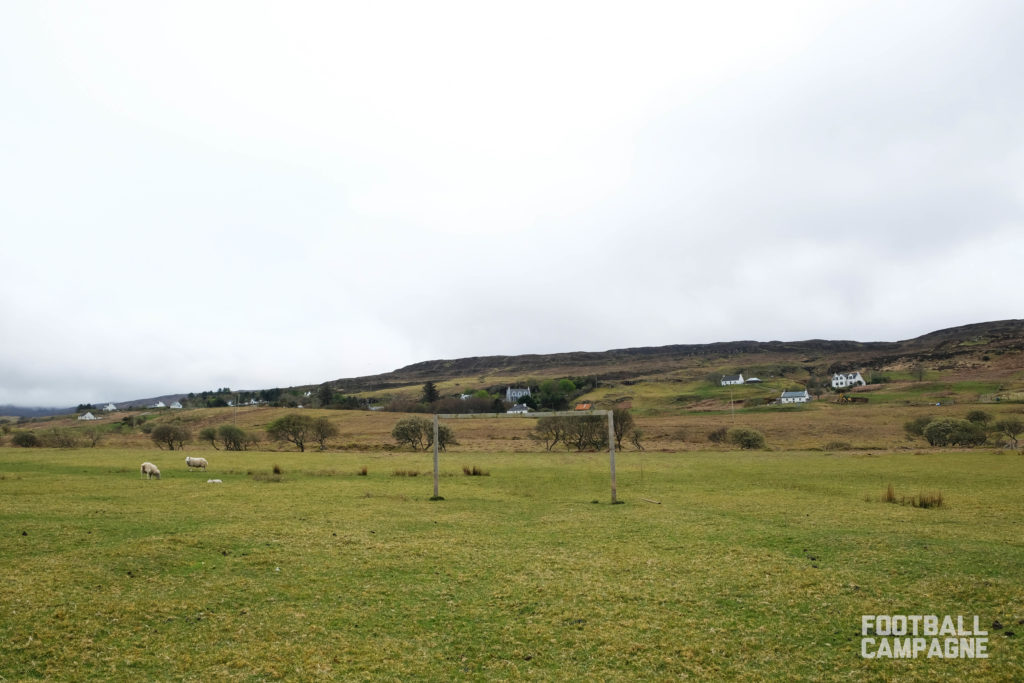 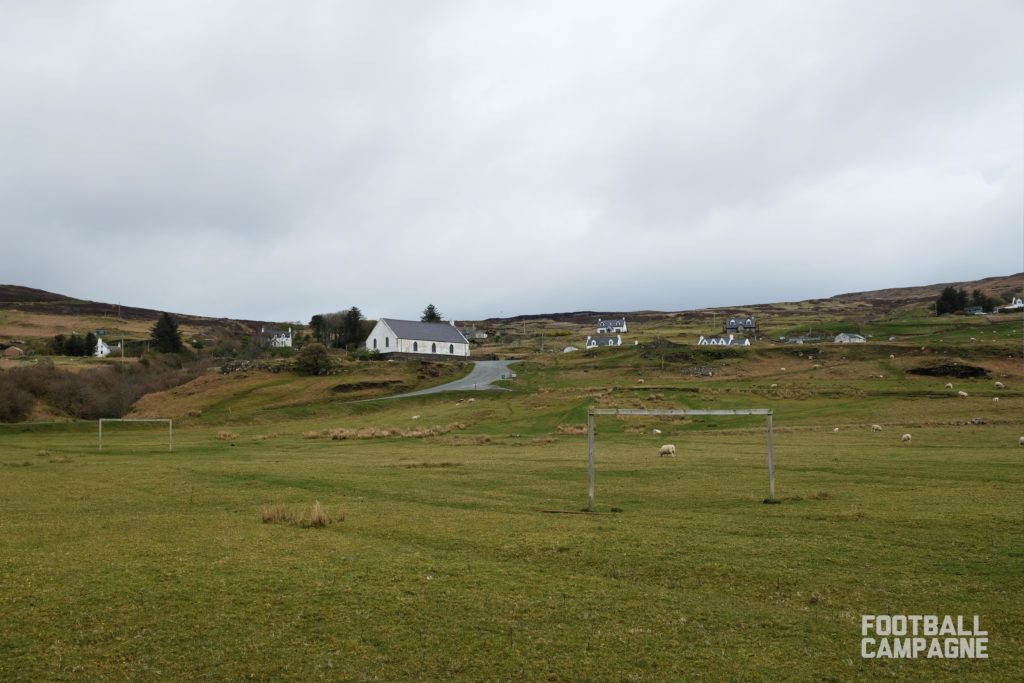 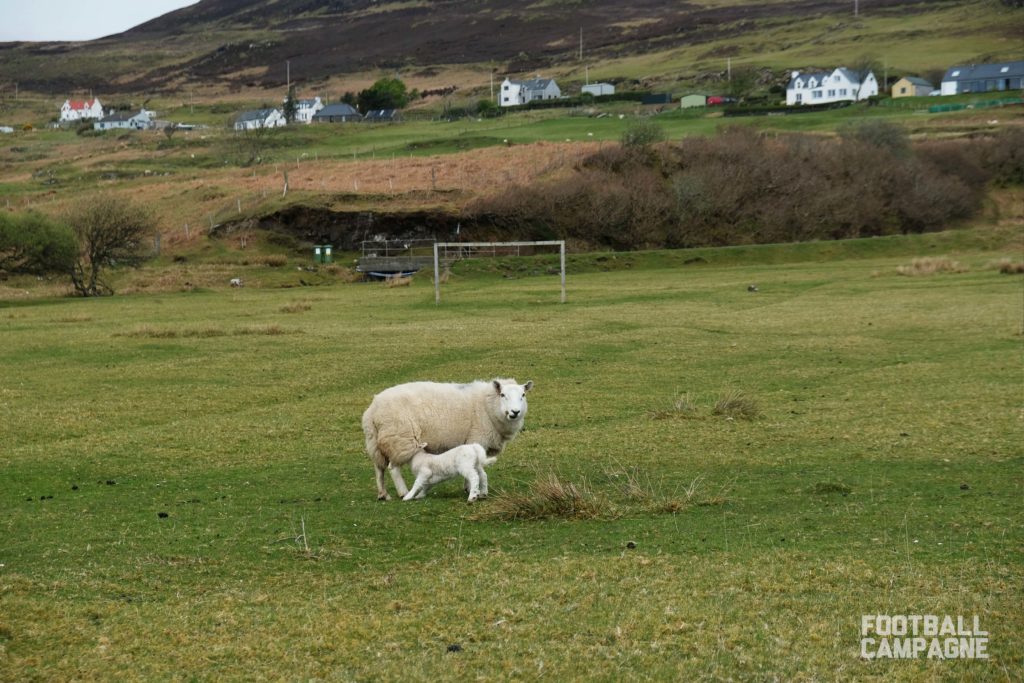 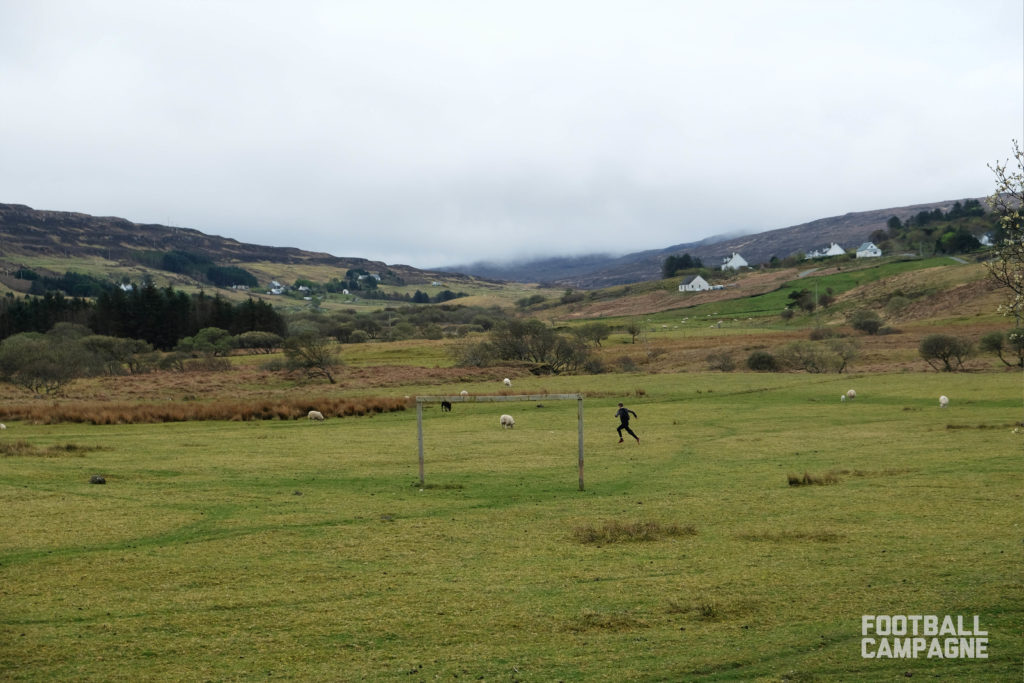 Right by the sea, in the shadows of the Isle of Skye. Kinlochsniel stadium can pretend being one of the most beautiful of Scotland, but is also the proud home of the one and only Kinlochsniel Shinty Club. The local team which have the honour of being sponsored by Eilean Castle Donan, the HQ of MI6 in James Bond, The world is not enough. 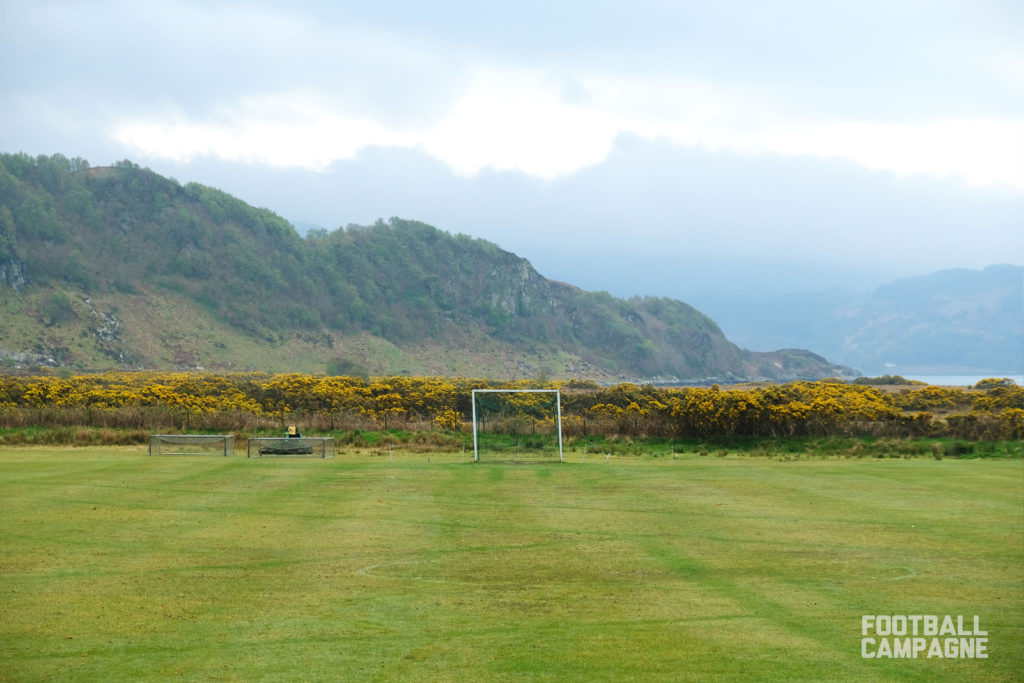 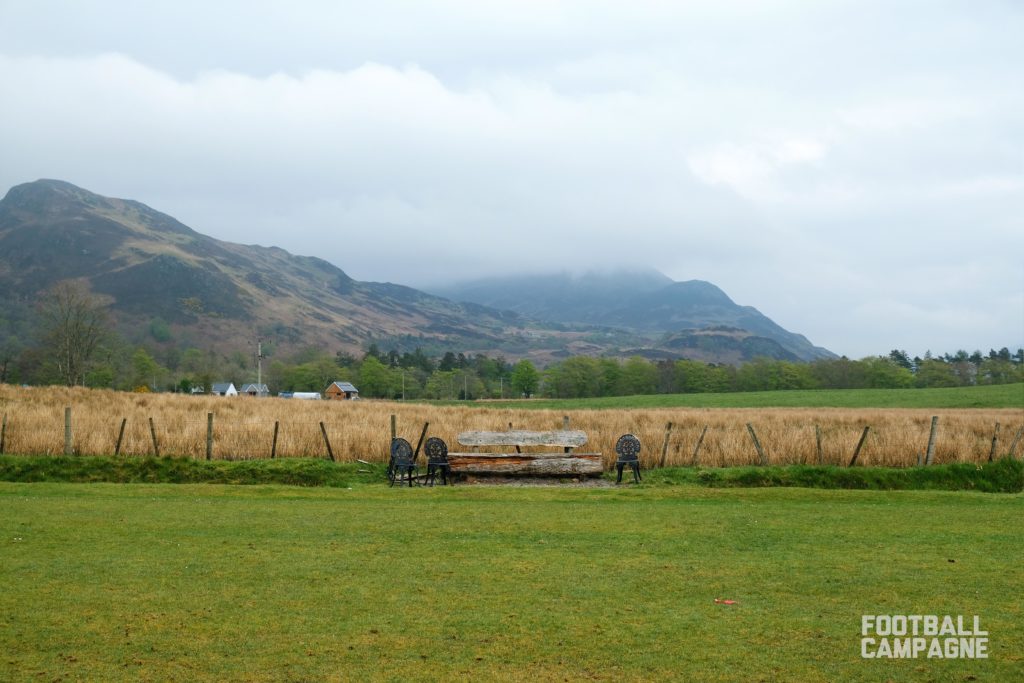 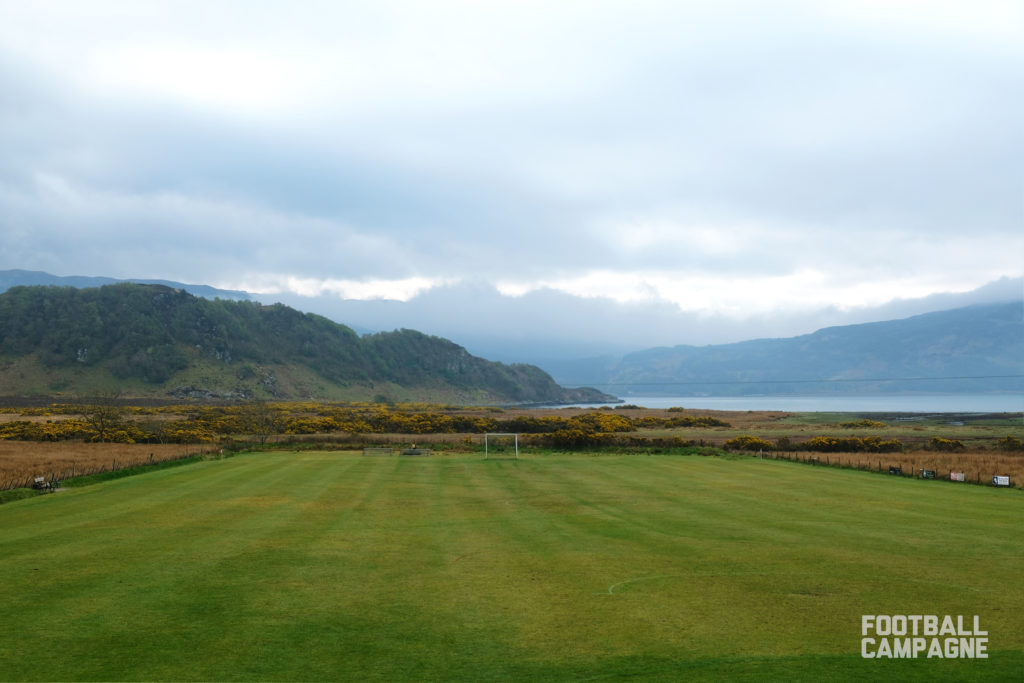 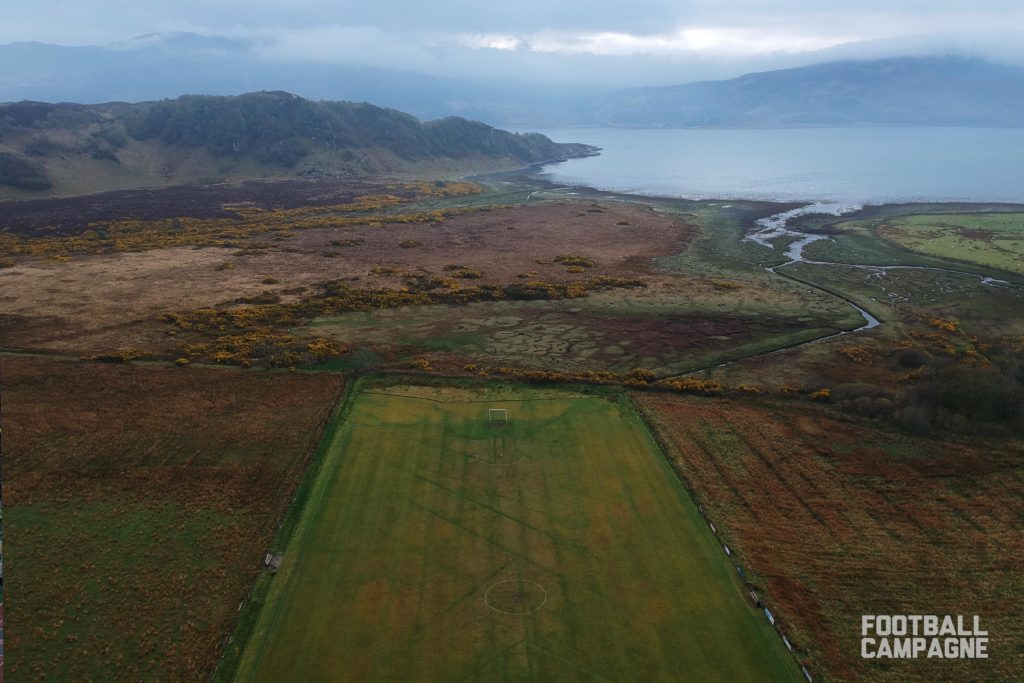 Here it is ladies and gentlemen. The football pitch of Loch Ness. Ignored by tourists who prefer looking for pointless old legends. Goal posts left on their own. Lost. Forgotten. 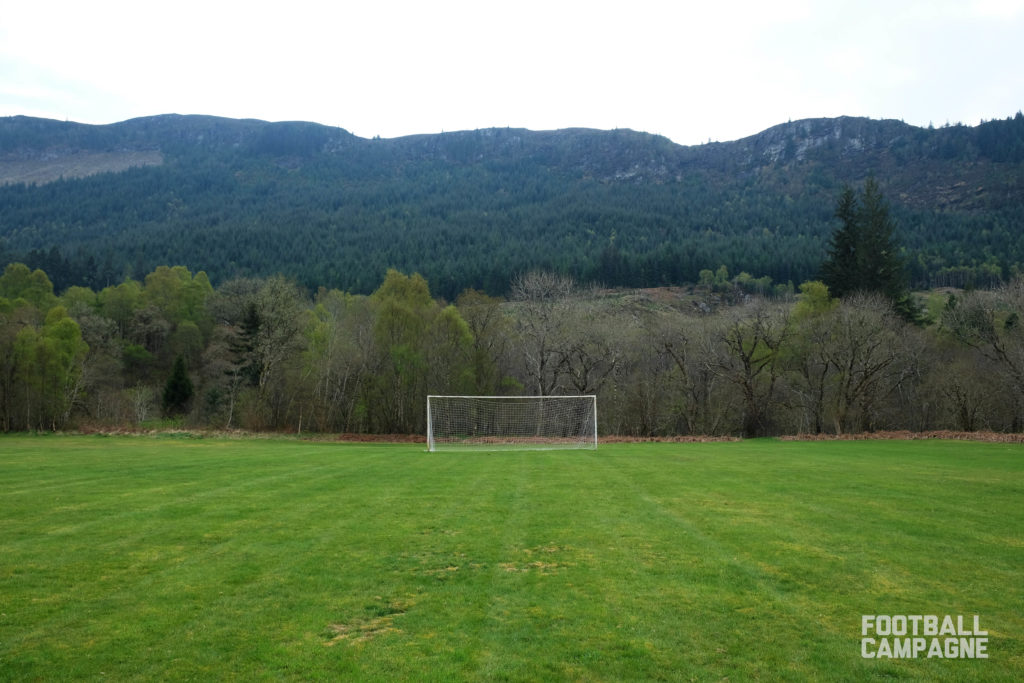 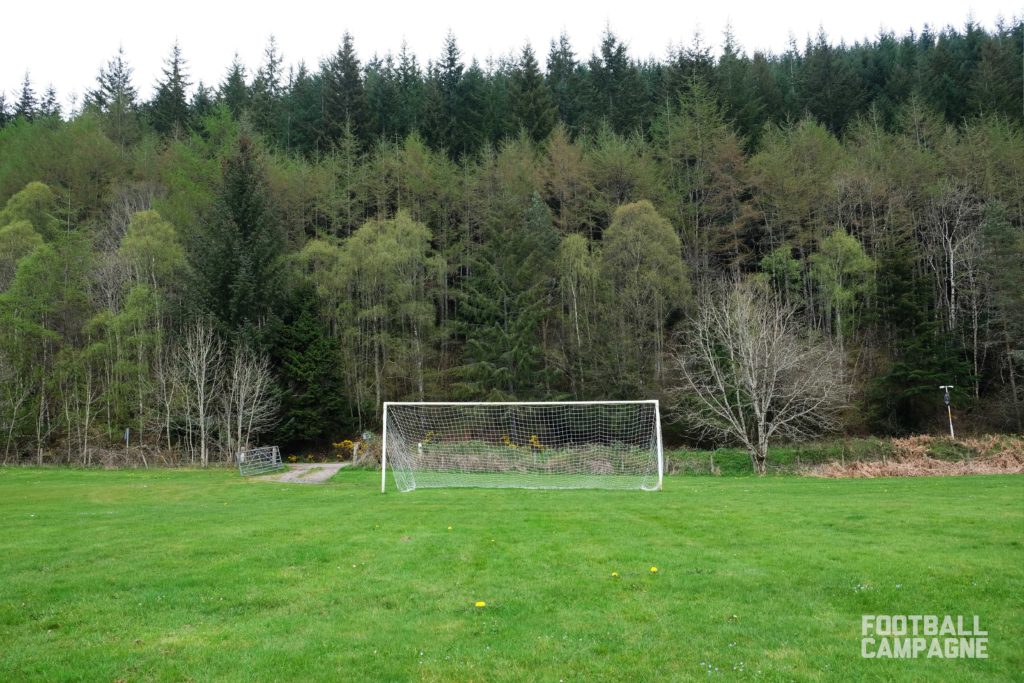 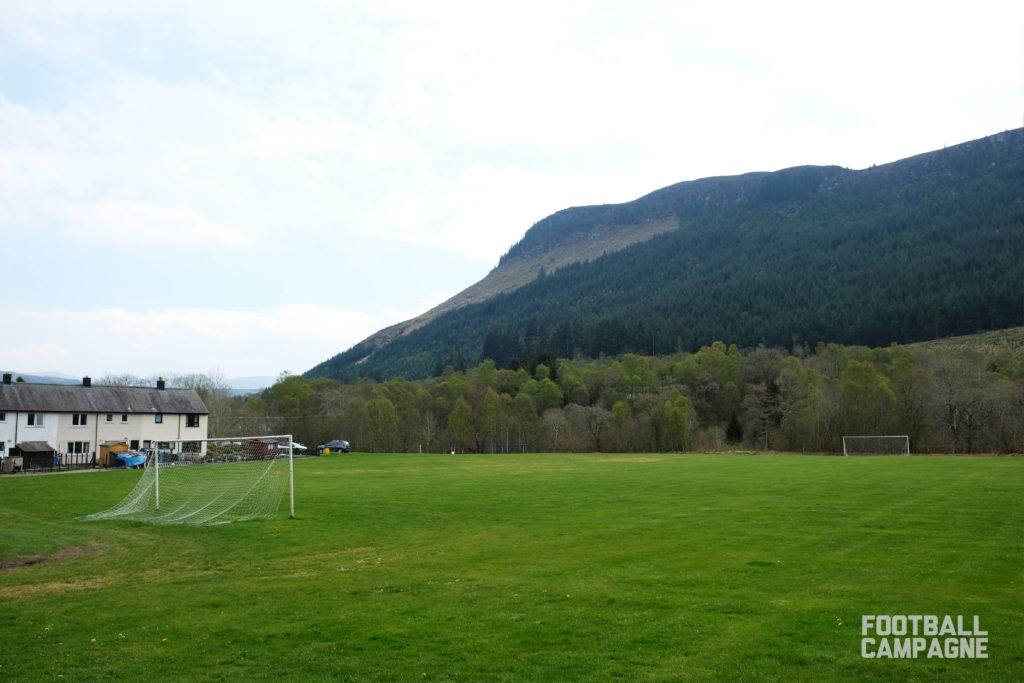 A pitch in the pure tradition of Football Campagne. No lines. No nets in the goals. Shots going straight to the sea Definitely something we had to see. 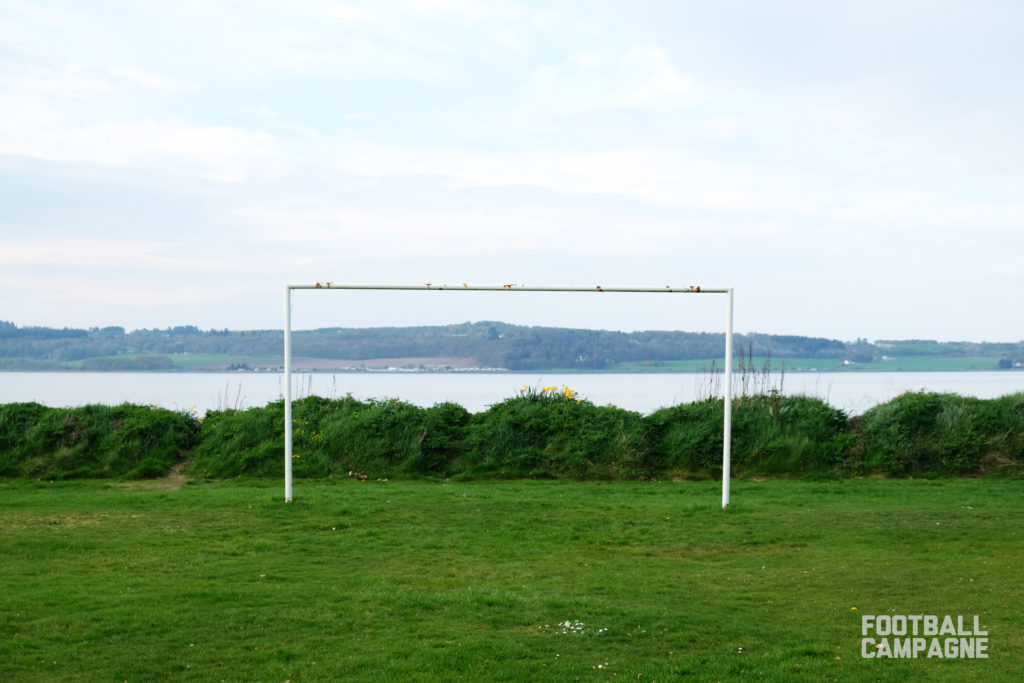 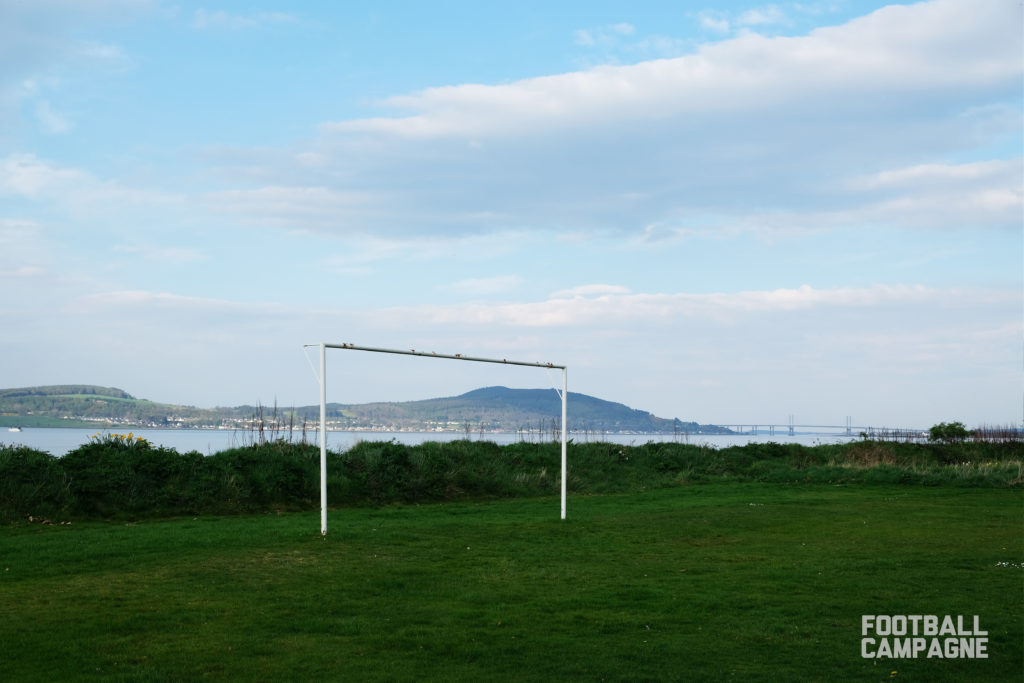 Pictures by Jeremie Roturier, who truly annoyed his partner to stop the car at every single pitch the saw on the road.