After his adventure at Espanyol Barcelona, Theo keeps exploring Spain to discover local football. This time, he’s bringing his camera in Fuerteventura Island in the Canaries. On a geographical standpoint, Fuerteventura, Spanish territory, is at 97 kilometers from the African coast and the Moroccan Sahara. The land is arid, desert and windy. Formed after a volcanic eruption, there are still some beautiful volcanoes, which can be climbed, which is a really good news for the hikers who read us. Cut some slices of chorizo, take a good glass of red wine and follow us for this trip to Fuerteventura.

Dear Theophile, thank you for these pictures coming straight from Fuerteventura. What the hell did you do over there?

Hi amigo Jeremie. Well, I went celebrating my Birthday there with my girlfriend. As I leave in Barcelona now, a lot of my Catalan friends told me about that place as a paradise for the beaches, surfing and photography. But football wise it’s not necessarily the best spot.

Before arriving on the Island, did you have any idea of the kind of football pitches you’d find?
The island is arid, desert and windy. It’s actually quite similar to Morocco in terms of geography and climate. With only 50 inhabitants per square kilometer, even locations where people live look more like small villages lost amongst rocks and giant palm trees, than big Spanish cities.
What does football mean for the local population?

Nothing and everything at the same time. Fuerteventura is the second largest island in the Canaries and the one with the  smallest amount of people living there. When you’re a kid, growing up your favourite sport will be surfing or kitesurfing. But even when you live in somewhere that remote, football remains a religion where you are as it is in the rest of the country. Each region of Spain has one football team that people support. In Fuerteventura it’s UD Las Palmas, the club from Canaries capital and former team of Loic Remy. And each island in the Canaries has its own team, which is Castillo in Fuerteventura. The team sits currently at the bottom of Canaries 3rd Division. I don’t need to tell you the players aren’t top level, and are complete amateurs. But even at the middle of nowhere in the Atlantic Ocean, you find a club with real installations, real values, and proud to defend its colours. 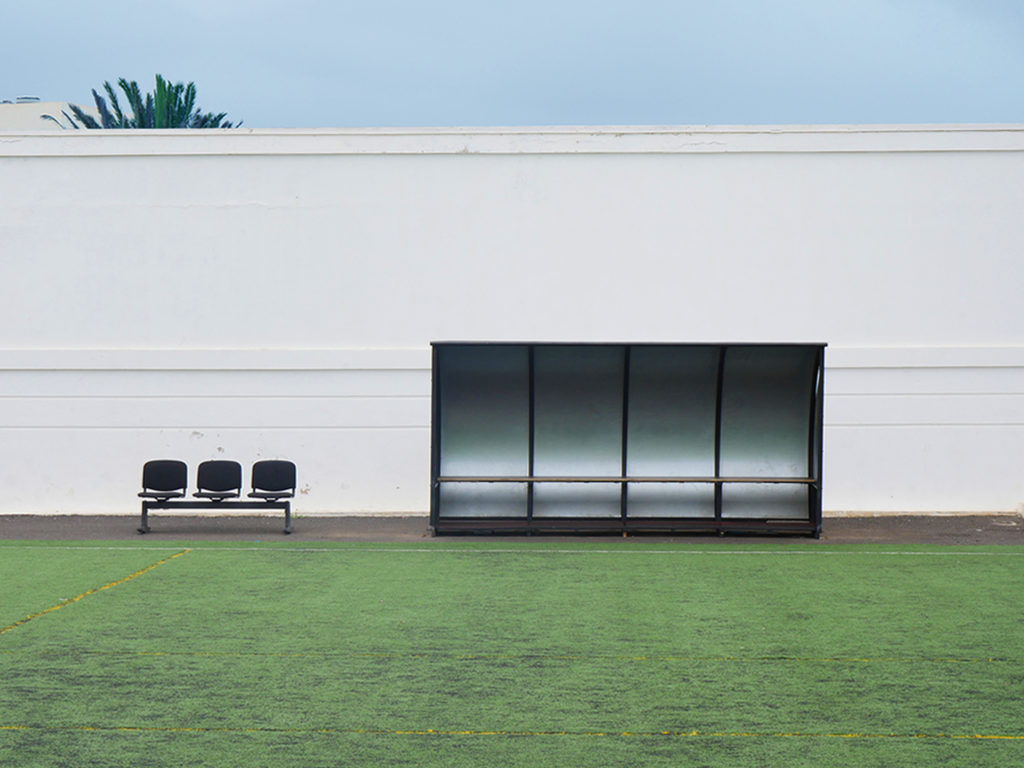 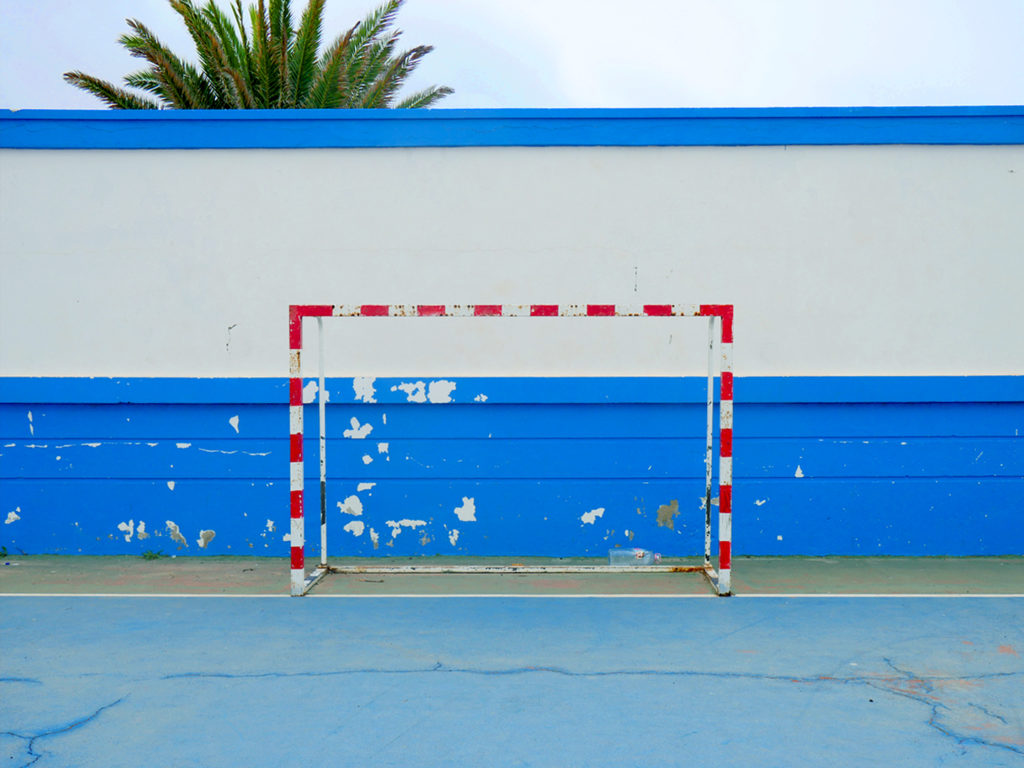 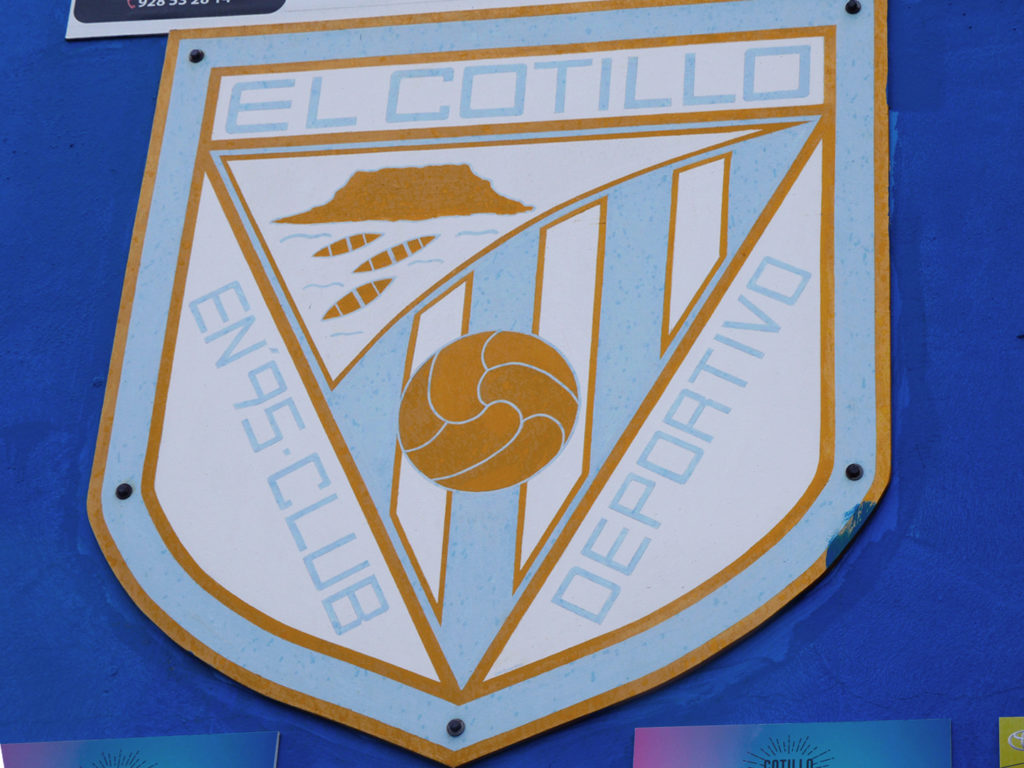 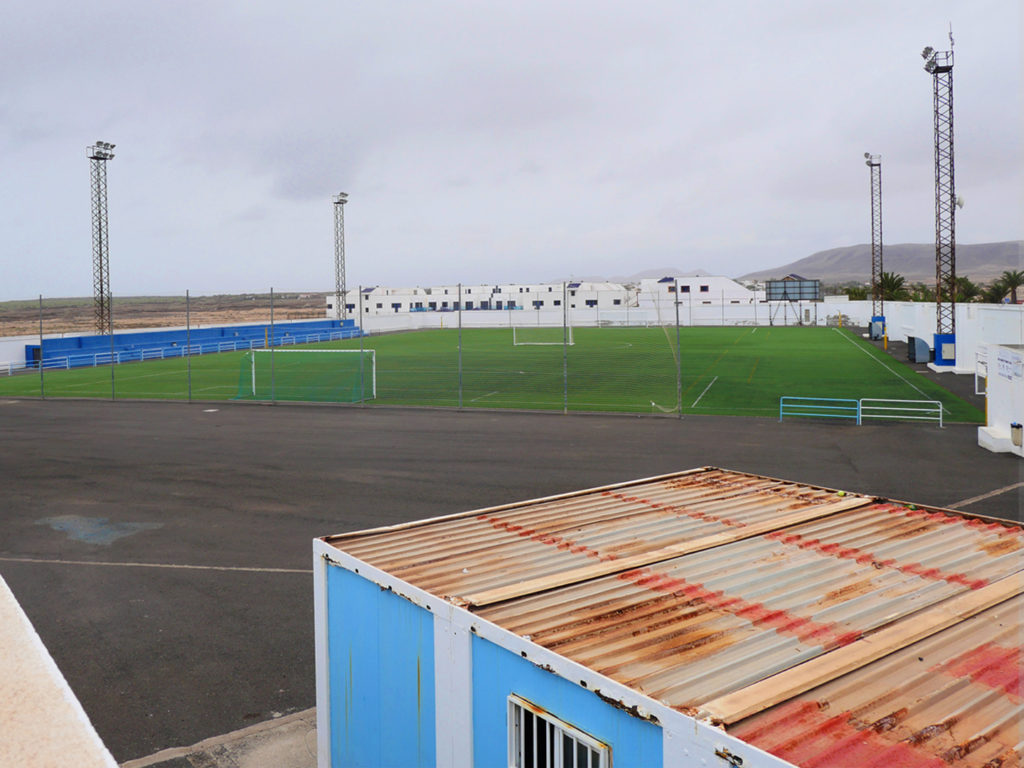 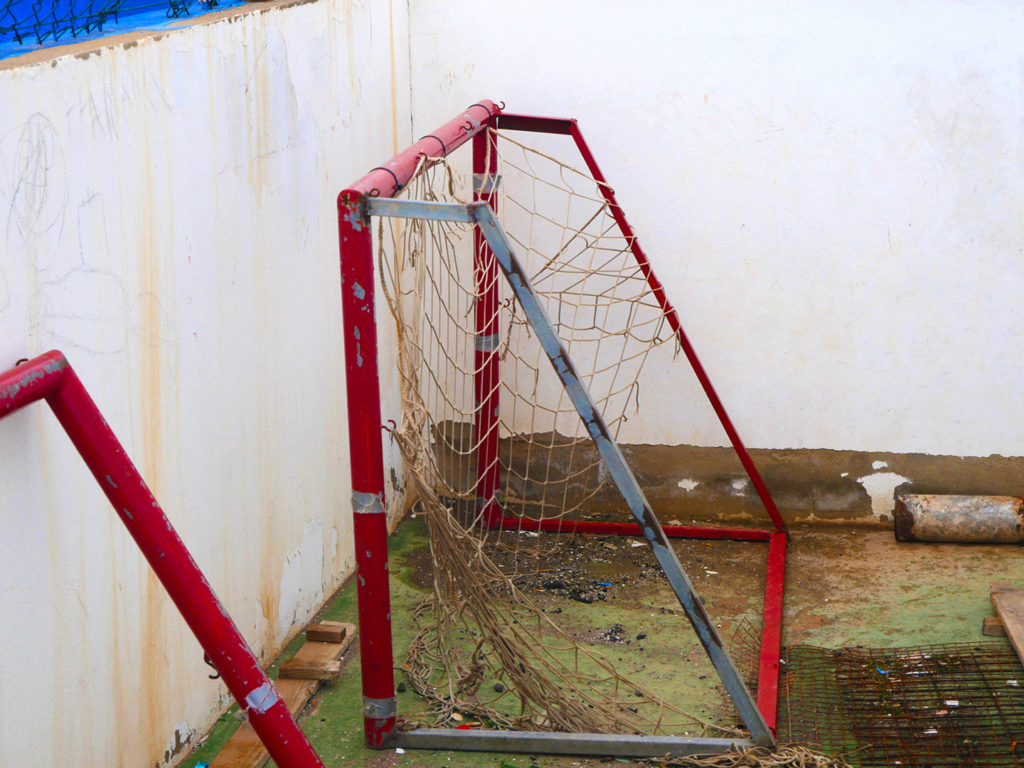 In terms of installations, can we find some proper stadiums, or is everything really abandoned?
I’m not gonna lie, it’s pretty poor standard. The kind of things you were used to during a class of sports as a teenager. Cold water in the showers, and 3G pitch since grass can’t grow. And then regarding the pitches in villages, it’s really old school. The farmer makes the ground kind of flat, they put three pipes together to make the goals, some rocks for the lines of the pitch and that’s it.

This pitch in the middle of the desert looks absolutely incredible! How did you happen to find it? What were your feelings when you were there?
That’s a proper gem in the desert. I was visiting an old mill (Tefia mill), as I was planning to get my postcard picture. And suddenly I noticed some goal posts far away. I had to go take a look and take a shot. It was a graphical encounter. The lines of the goals creating a frame in the landscape. As I stepped on the ground, I realised it was all black and soft. Super soft. I was like, what the fuck? What’s that? Side lines and penalty spot made of rocks! Playing football on a volcano, this is exactly it. And the thing is, the kids from the village nearby not only have to play just on their own, but there isn’t even nets to stop the shoots. They should avoid hitting the ball too hard, other it’d be a real pain in the ass to go get the ball back on the pitch. In a nutshell, a lunar landscape and a pitch really not convenient to play football.

Finally, the question everyone is desperate for you to answer. What alcohol shall we drink in Fuerteventura?
That’s a very important question. We drink wine from the island! The black soils absorb the heat of the sun’s rays. Every square meter have been won by the efforts of the winegrowers who build walls of dried stones to build small shelters in order to protect each vine against the wind. Growing on volcanic soils with a lot of sun all year long, the vines give a wine mineral and not super fruity, not spicy either. As an other option, I can also advise you to try the clara: beer and limonata. 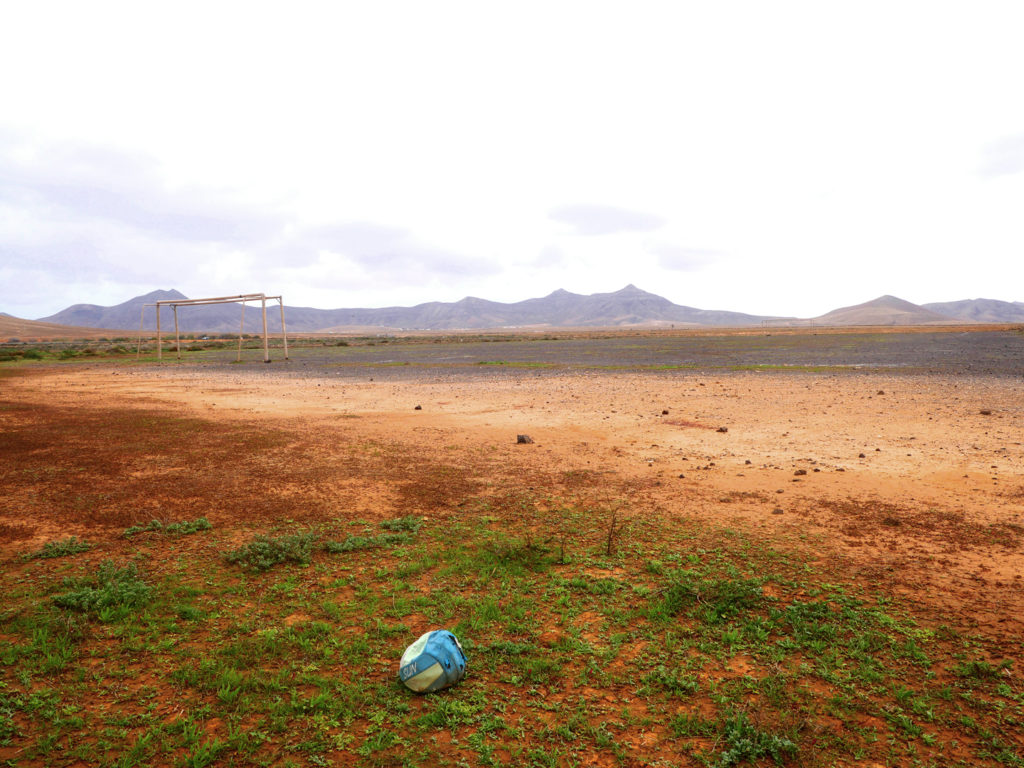 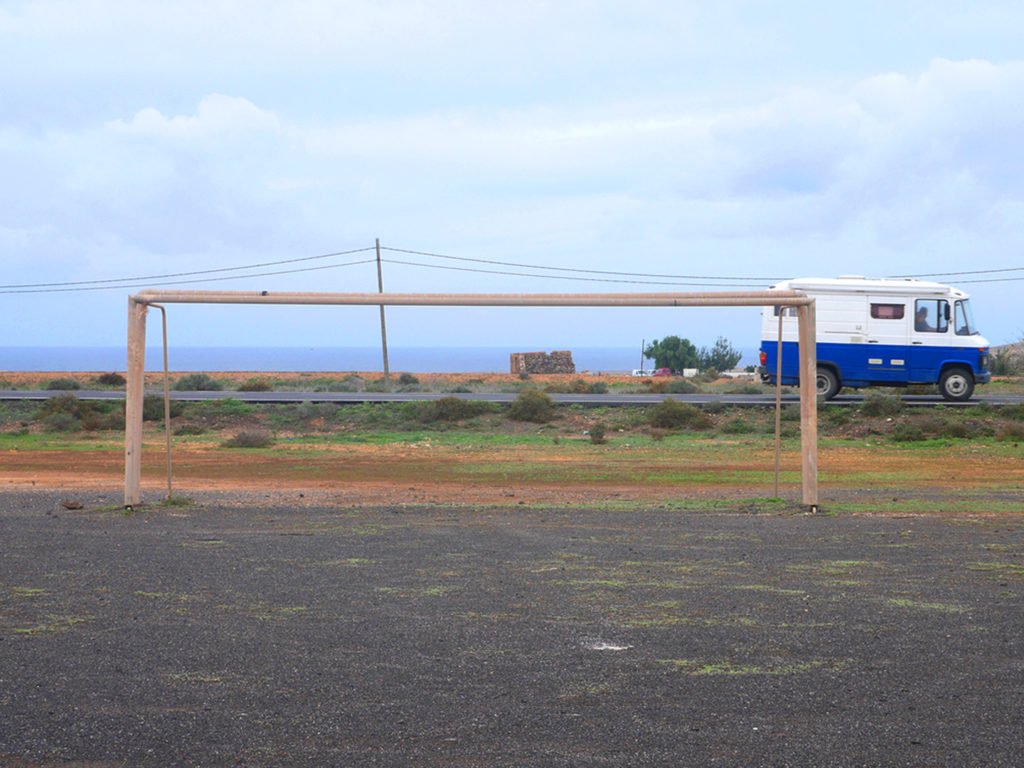 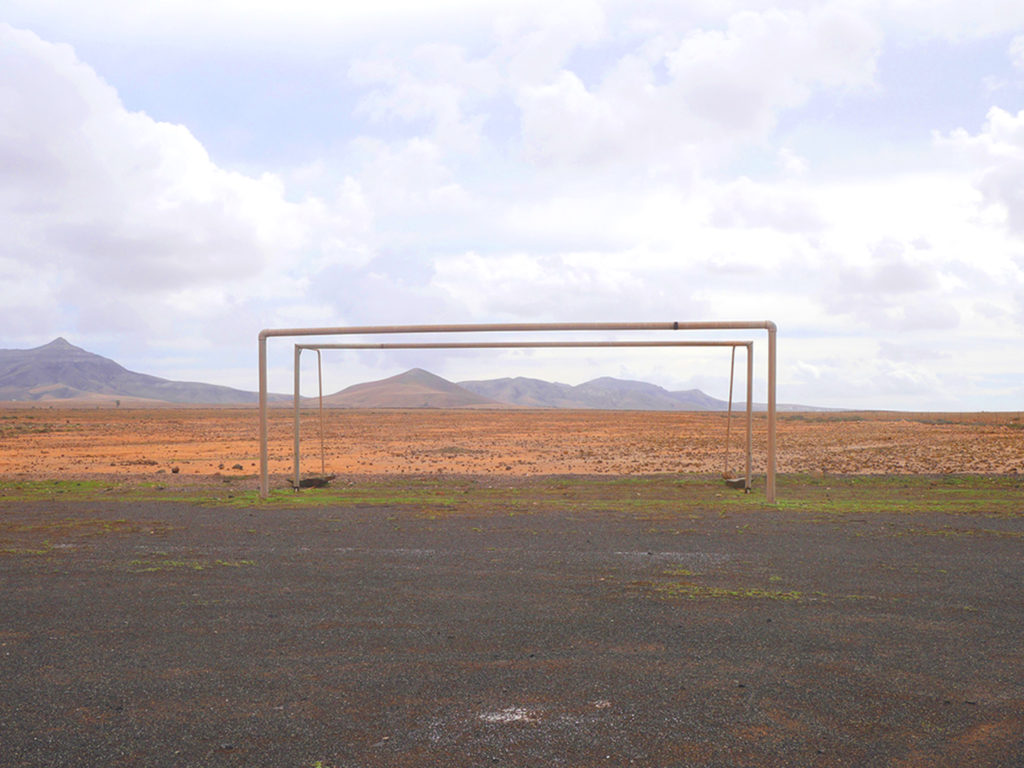 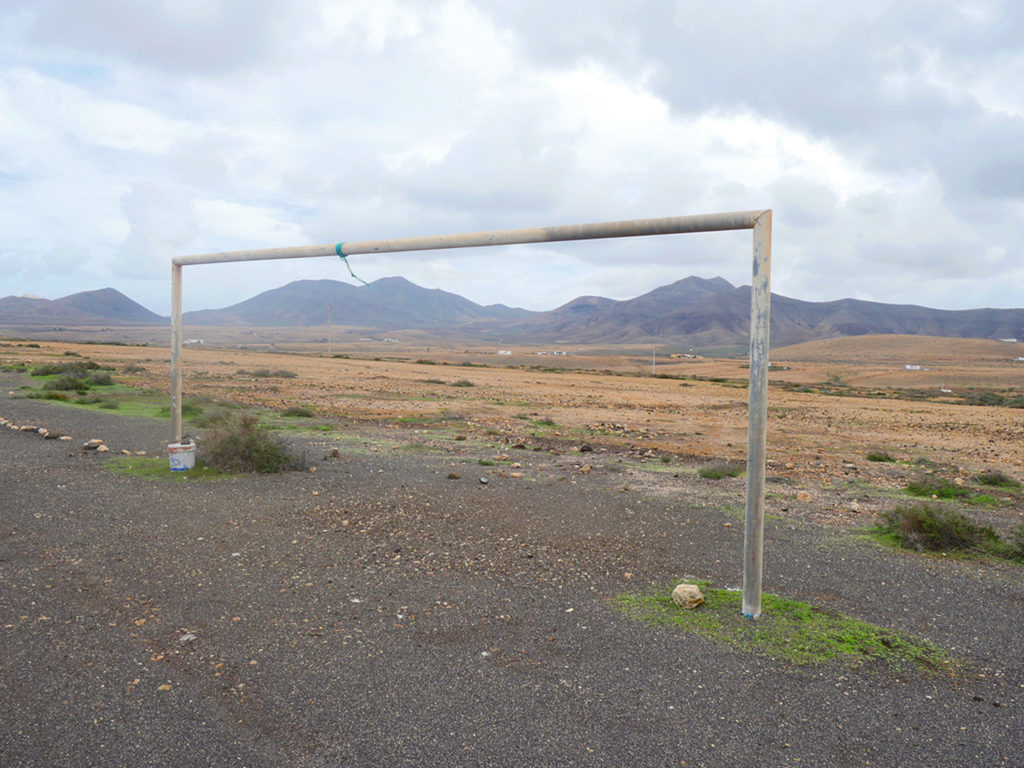 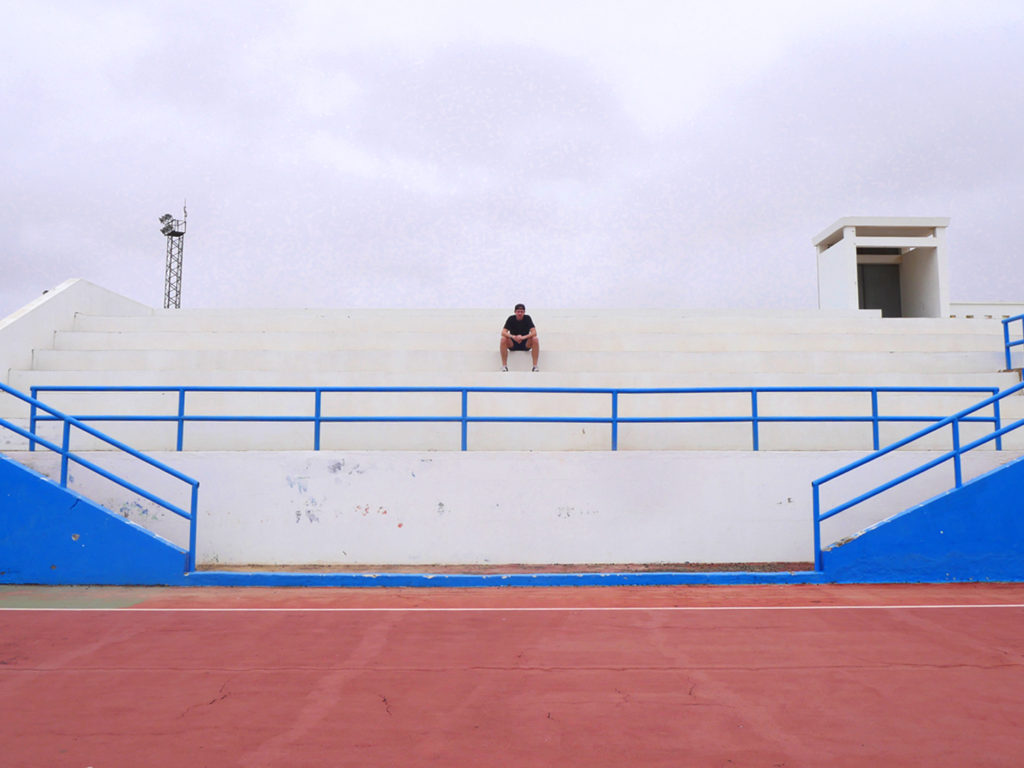 To follow Theophile Dreyfus work, go take a look at his website. One of the reason why we have a lot of respect for him, is that even on a weekend with his girlfriend, he thinks about us and brings us back some really nice pictures.